Do PIKs Mark the Peak of the Credit Cycle?

Connoisseurs of past credit catastrophes know that market peaks are typically characterized by especially risky deals, transactions that, with the benefit of hindsight, led rueful investors to clutch their brows and ask “what was I thinking?”  The recent sale of several toggle PIK (payment in kind) issues in the US high yield market, aggressive structures that give issuers the option to substitute additional debt for interest payments, has led me to wonder if we’ve arrived at just this turning point in the current cycle, particularly given the issuers’ unproductive use of the money raised.

As I discuss below, I think the answer is “no” – or at least “not yet”.  This mainly reflects the Fed’s support for the markets and the stabilization of the economy and consumer behavior.  But much depends on how the political environment shakes out after the election, the chances of further stimulus packages, and the path of the pandemic.

I’ll start with a little history.

Credit market excesses typically occur in times of low interest rates, when investor demand for higher yielding instruments leads to the creation of asset classes with risk-return trade-offs that were, again with the benefit of hindsight, way out of whack.  So it has to be of concern that yields on a range of fixed income asset classes now are lower than they were in the run-up to the great financial crisis (Figure 1), especially given the rising demand for income-producing bonds from retirees. 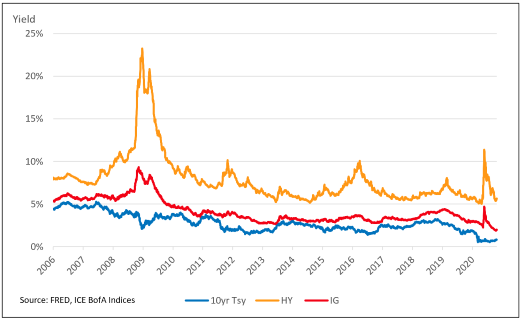 A further note is that while the Figure’s time series start in 2006, the data goes back to the mid-1990s for the credit indices and to 1962 for 10-year Treasuries.  Yields are at record lows even over these extended periods – a scary thought when we contemplate the risk of market excesses.  (On a side note, many readers will be aware that inflation-adjusted, i.e., real, yields were higher in the run-up to the financial crisis than they are now.  But since buyers mainly focus mostly on headline levels, I don’t see this as a significant mitigating factor.)

A common way for corporate bond investors to pick up yield is by accepting more credit risk and less favorable repayment terms.  As I describe in the next section, Toggle PIKs combine both these features.

The best way to think about toggle PIKs is from the point of view of the companies that sell them.

Risky companies, the types that usually issue PIKs, are often described as being in “fly or die” situations.  They’re under a lot of stress at the outset and have a high risk of defaulting, i.e., “dying” is a real possibility.  But they also have a lot of potential, so if they can make it through the next few years the alternative scenario (“flying”) kicks in as sales grow, they generate cash and pay down debt, or perhaps get bought by a stronger entity.

As noted at the outset, toggle PIKs give issuers the option to reduce cash outflows by switching, or “toggling”, from making coupon interest payments to giving investors bonds instead.  Saving cash when you’re stressed is good, but the trade-off is that it piles up additional debt that must be repaid later.  Thus, toggle PIKs can help an issuer stay afloat (or aloft, to be consistent with my aeronautical analogy) for a while, but because the company becomes more leveraged as a result it increases the risk of crashing later on.

A related question when considering whether the issuance of toggle PIKs marks the peak of the current credit cycle is what the proceeds of the bond sales are being used for.  Unproductive uses signal that bondholders are accepting even more risk in their pursuit of yield, so are a bad sign.  Recent trends are not encouraging in this regard.

To recap, the risk for bondholders is reduced when the borrower uses an issue’s proceeds in ways that generate cash that can be used to repay its creditors.  Examples of such productive uses include retiring higher interest rate borrowings, investing to boost sales or efficiency, and financing a strategic acquisition.  Risk increases when the money is used unproductively, for example to build a new company headquarters building (yes, this does happen) or when it’s paid out to shareholders.

According to media reports, some recent toggle PIK deals are “dividend recaps”, meaning that the companies have taken on additional debt in order to pay their owners, usually private equity firms, a “special” (meaning very large) dividend.  A dividend recap is therefore nothing more than a transfer of funds from a company’s bondholders to its shareholders.  In my view, creditors’ willingness to countenance this, especially when combined with PIKs’ risky structures, is a sign that risk appetites could be approaching unhealthy levels.

Thus far I’ve been describing why the risks related to toggle PIKs could mean that we’re fast approaching the market peak.  I will now switch tacks and make the case that despite the warning signs, there’s enough support for the credit markets that a sell-off is not imminent.

Getting paid for the risks your taking

Market tops are also characterized by the mispricing of credit risk, i.e., cases when investors are no longer getting sufficiently paid for the risks they’re taking.  The movement of credit spreads – the extra yield that corporate bond investors receive for accepting credit and other risks – since March, when the Federal Reserve Bank unveiled support packages for the markets and Congress passed the CARES Act and other measures, indicates that bondholders are still being paid appropriately for buying riskier debt.   Figure  2 shows spread movements since the beginning of the year for bonds rated BB (the lowest risk in the high yield bucket) CCC (the highest risk), and for the market as a whole. 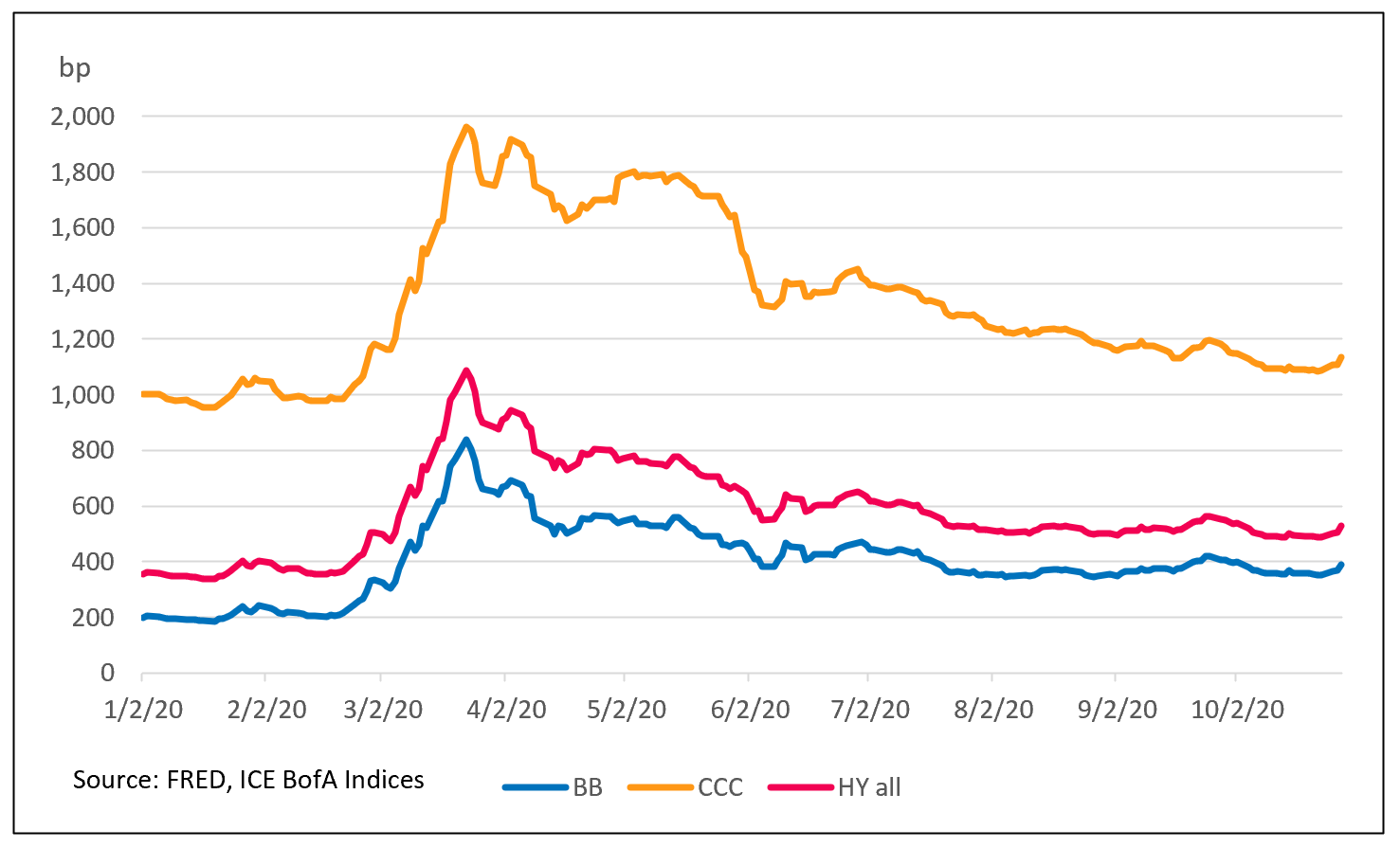 What’s encouraging, in terms of the markets pricing in risk appropriately, is that CCC spreads have recovered by less, on a percentage basis, than those for higher rated entities (Figure 3), meaning that holders of these CCC bonds are still being paid relatively well.

Markets dynamics reflect developments particular to them as well as general economic conditions.  I think the two best arguments for the “not yet” response, when it comes to the timing of the top of the market, comes from both sources.

In terms of credit market-specific developments, recall that market collapses, particularly in high yield, are often triggered by the loss of liquidity, typically when a sharp rise in risk levels sets off a flight to safe assets and makes it prohibitively expensive for issuers to sell bonds.  The stable spread levels in Figure 2 show that this is not currently the case.  A comparison with the equity markets provides further insights.

Figure 4 tracks the high yield bond spread and the VIX Index of equity option volatility.  Both measure risk aversion.  While the VIX displays a greater degree of jumpiness over the years, until the Covid crisis the two time series show a high level of co-movement.  In March of this year the VIX rose to a level exceeding that of the great financial crisis.  It has since remained much more elevated than the high yield spread, a significant departure from the past.  I think the divergence mainly reflects the Fed’s support programs for the credit markets, for which there is nothing comparable for equities. 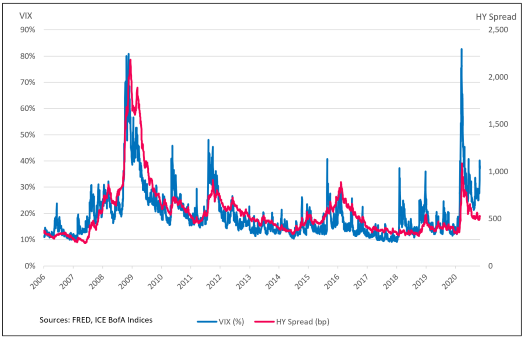 Turning to general economic conditions, a major plus point is that the economy and consumer behavior seem to be stabilizing.   At least partly reflecting this, weekly unemployment claims, while still elevated, have come down from the peak reached during the economic shutdown (Figure 5). 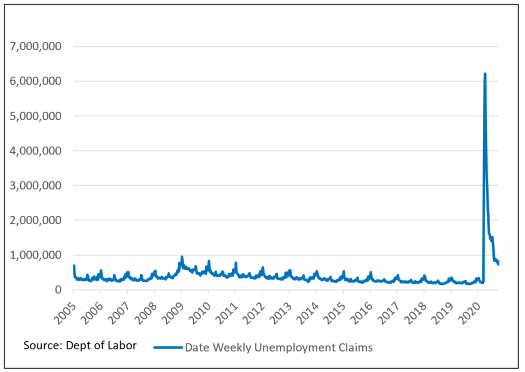 A second consideration is the falling personal savings rate (Figure 6) 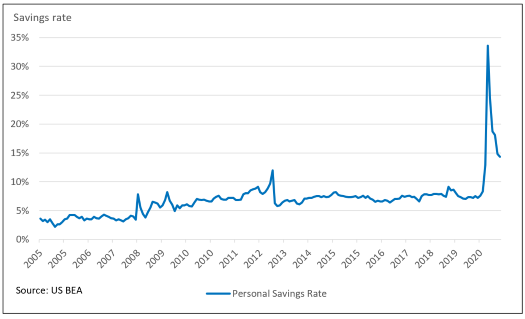 As with everything to do with the pandemic, the initial spike in the savings rate was “off the charts”, as consumers cut spending in the face of the highly uncertain outlook.  Since in a national economy one person’s spending is another’s consumption, the higher savings rate resulted in a massive fall in GDP.  While the savings rate remains around twice its historic average, the decline from its post-Covid peak contributed to the sharp rebound in third quarter GDP.

Covid: We’re in it for the long haul

My final point is that while Covid will be with us for years to come, Americans seem to be adapting their behavior to it.  As I show in Figure 7, fluctuations in the announced rate of Covid infections over the past few months have had little impact on Americans’ willingness to visit retail and leisure locations, including restaurants.  While this could change if infections surge even further, the stabilization of consumer behavior is supportive of the economic outlook, and therefore the markets. 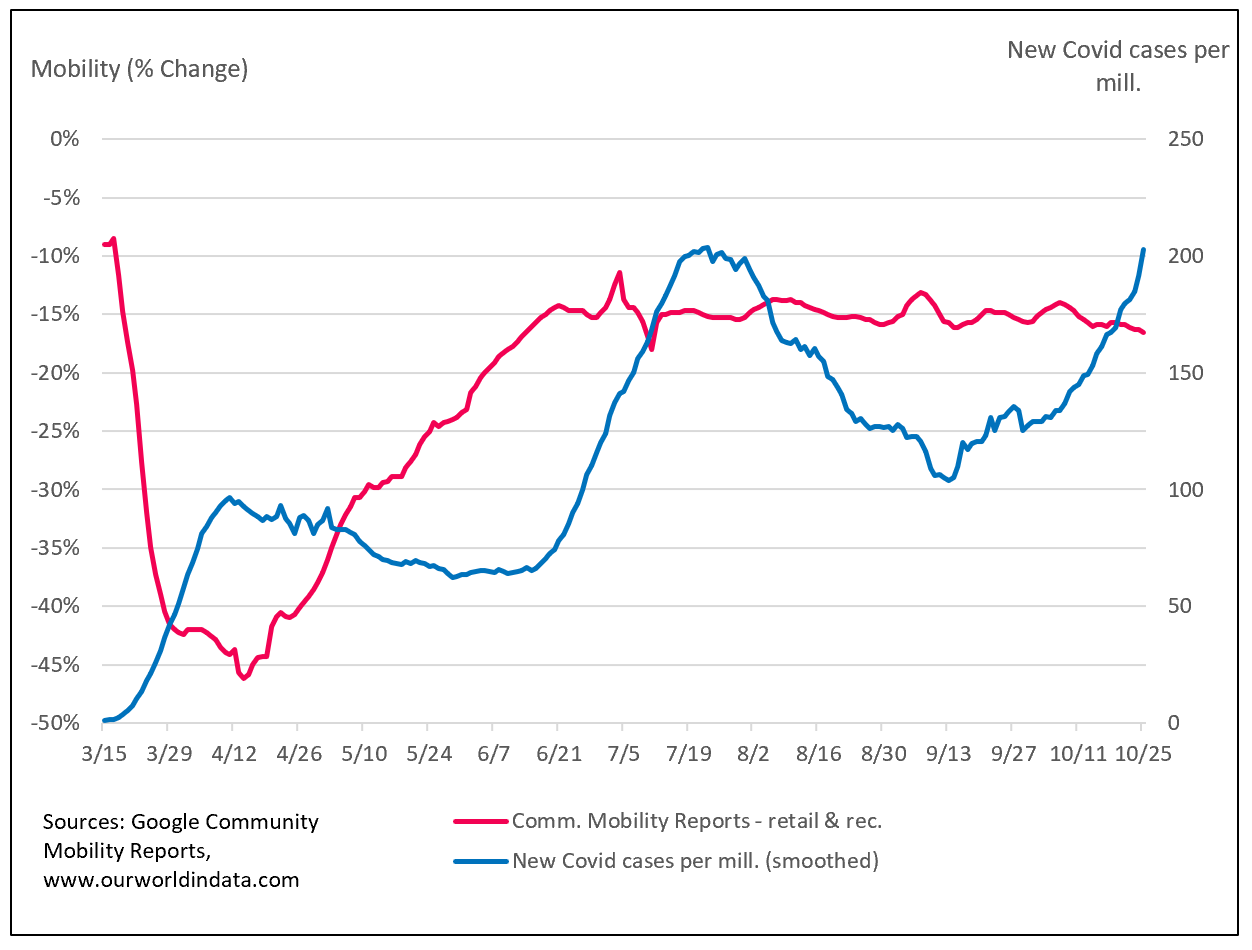 I’m all too aware that these positive indications sit incongruously against the climbing rates of infections and deaths and the still very high rate of unemployment.  But the evidence is that the latter is concentrated to the most exposed sectors of the economy, e.g., leisure and travel.  This has hurt a huge number of people, but we need to keep in mind that other, larger, sectors such as finance and durable goods, are doing relatively well.  The upshot is an economy that is operating well below pre-pandemic levels, but which is on a gradual pace of underlying growth (this assessment disregards the third quarter snapback from rehiring workers temporarily laid off in the previous quarter).  And since credit markets don’t need rapid growth to do well, it provides further support to the “not yet” view of the timing of the market’s peak.