Forget about Stocks: When it Comes to the Economy, the Corporate Bond Market is What Matters

Over the past 20 years companies and financial institutions have borrowed $23 trillion (yes, that’s trillion with a “t”) from the corporate bond market, underlining its crucial role in the American economy.  The money flows the other way in the stock market: over a comparable period, companies paid out around $10 trillion (again, with a “t”) to investors in the form of equity buybacks and dividend payments.  This far outstripped the amount of capital investors provided by purchasing newly issued shares.  Moreover, the trend is accelerating, with the level of buybacks and dividend payments increasing greatly from earlier levels.

So for all we hear about the stock market’s vaunted role as a financier of growth, the market could crater, new share issuance could grind to a halt, and, for most companies, pretty much nothing would happen.  Not so for the bond market.  As a major supplier of capital to corporate America, its closure would be felt throughout the economy, crimping employment and reducing the prospects for a quick recovery.

Fortunately, the bond market remains open for business, thanks to the Fed’s bond purchase programs, government support for businesses and individuals, and a base level of investor confidence that the economy is on the mend. 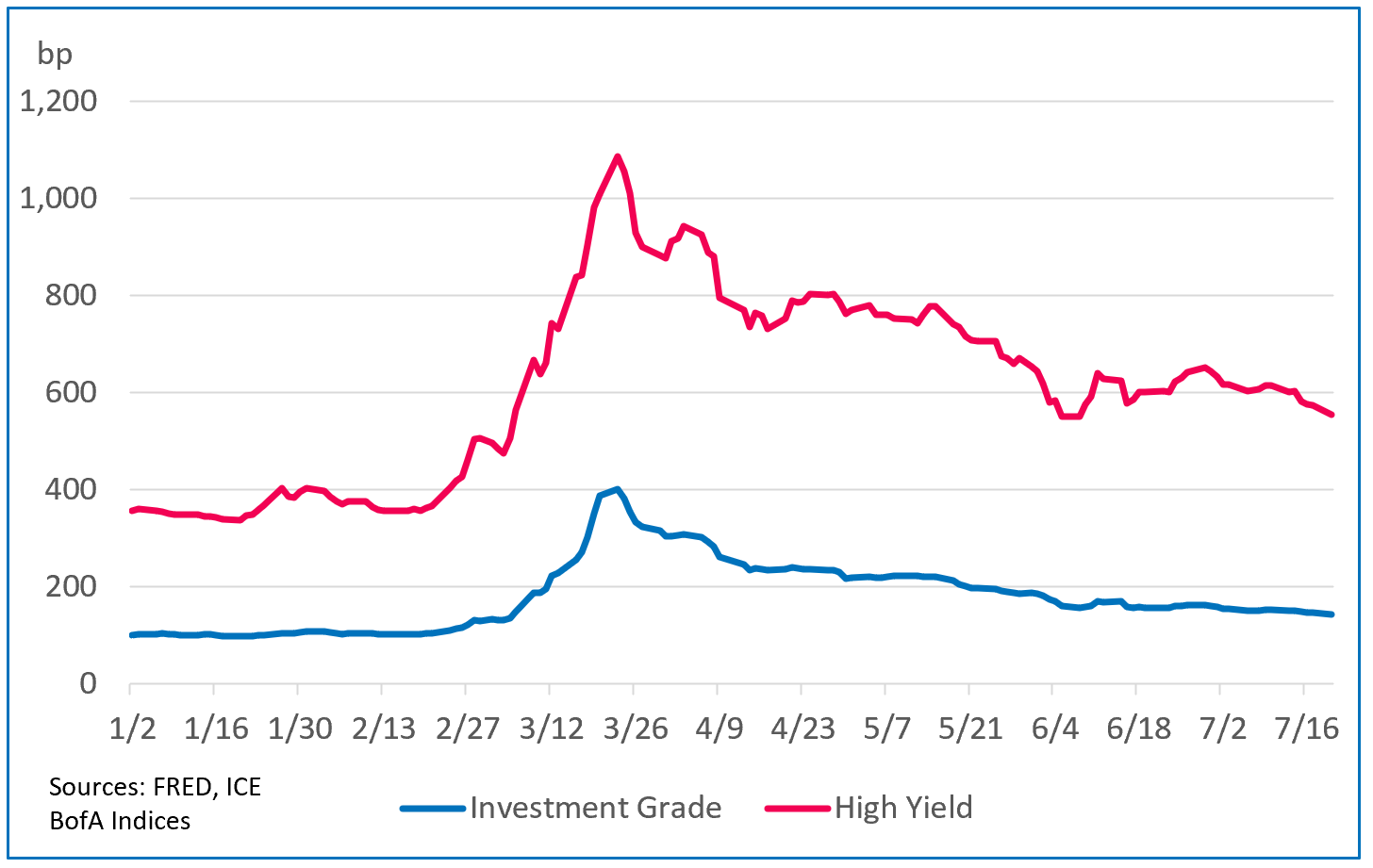 One indication of the market’s healthy state is the downward trend in credit spreads (Figure 1).  Since spreads are proxies for bondholder concerns about default and other risks, this is indeed a good sign.  Another positive indication is that issuance has been running at a record pace as companies take advantage of low yields to build up their cash reserves (Figure 2).

What could change this?  Central bank intervention has greatly reduced worries that market liquidity will dry up, which is a hugely positive development.  With this off the table, the main risk concerns company solvency. The downside scenario here is straightforward.  It starts with the current economic slowdown turning into a deep and prolonged slump, which hurts companies’ ability to generate cash and pay their bills, including the interest due on their bonds and loans.  The default rate rises as a result, and stays elevated.  Default risk is a principal driver of bond values, so this would lead investors to flee the market.  Companies, especially weaker ones, would then no longer be able to raise funds by selling debt.  This would bring forward the point at which they run out of cash and default, thus accelerating the downward spiral. 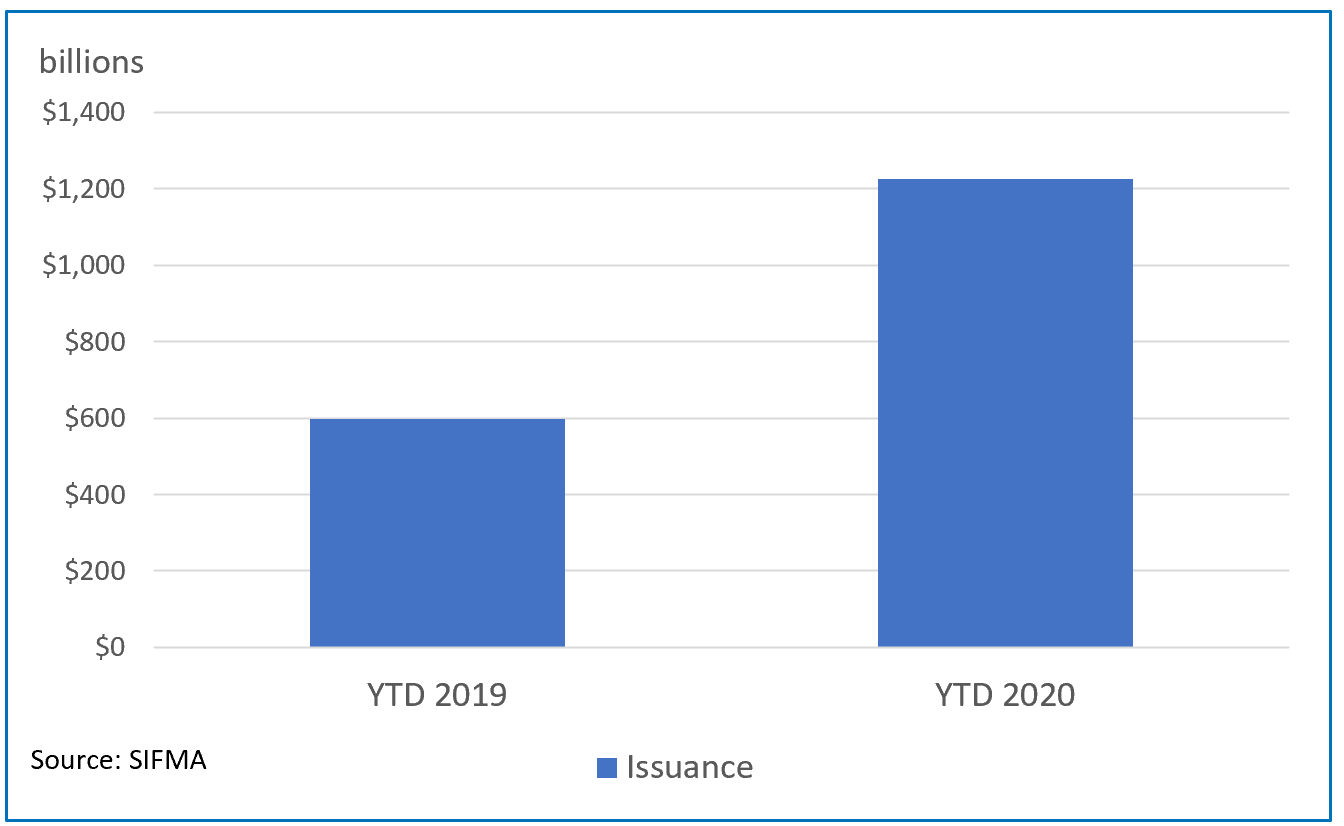 The seeds for this potential chain of events are evident today.  The rate of Covid-19 infections and deaths is growing alarmingly.  As I described in an earlier post, this will cause individuals to turn cautious in their behavior and spending, regardless of whatever “opening” plans are promulgated at the Federal and state levels.  And absent the availability of widespread testing, the prompt reporting of results, and follow-up contact tracing, there seems to be no way to reverse the rise of infection rate without shutting down large parts of the economy.  On top of this, the outlook in Congress for the passage of another extensive economic support package remains uncertain.

Of course, there’s always the possibility that all will be made good – and soon – by an effective and widely distributed vaccine, one that the vast majority of Americans will agree to be injected with.  It’s a nice thought, but I think it’s dangerous to rely on such a Deus ex Machina event to save the day anytime soon.  As the old cliché puts it, hope is not a strategy. 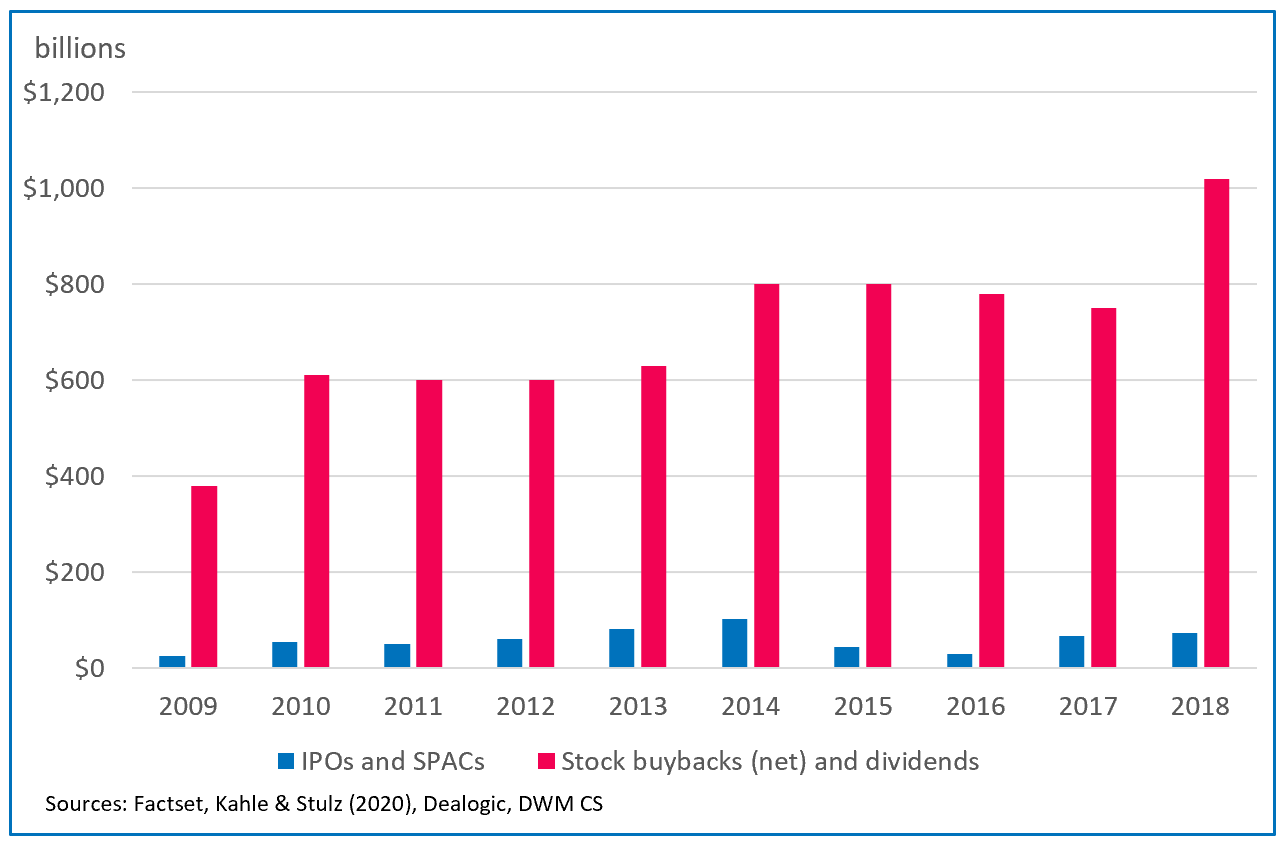 The near-irrelevance of the stock market in funding corporate America was underlined by a recently published paper from the National Bureau of Economic Research (NBER), which shows the scope of stock buybacks and dividend payments since the 1970s and the degree to which these practices have grown in the 21st century.  I drew on the paper’s findings to create Figure 3, which compares share repurchases (net of issuance) and dividend payments, in inflation-adjusted dollars, to money raised through initial public offerings and the sale of shares by special purpose acquisition companies (SPACs).  To put it another way, the Figure shows the amount of money equity investors have received from companies (the red bars) compared to what they’ve contributed to fund company growth (the blue bars).

The gap, as I noted at the outset, is staggering.  The jump in 2018 really stands out.   It reflects, of course, the surge in cash levels resulting from the 2017 Tax Cuts and Jobs Act, which reduced the corporate tax rate and paved the way for firms to repatriate funds held overseas.

The shift in the allocation of cash towards distributions to shareholders is clear from Figure 4, which shows the net payout of cash (dividend payments and share repurchases net of issuance) relative to operating earnings, which provides a good proxy for the amount of cash generated by companies on an annual basis.

Figure 4: Payments to shareholders net of share issuance (adjusted for inflation) as a % of operating income 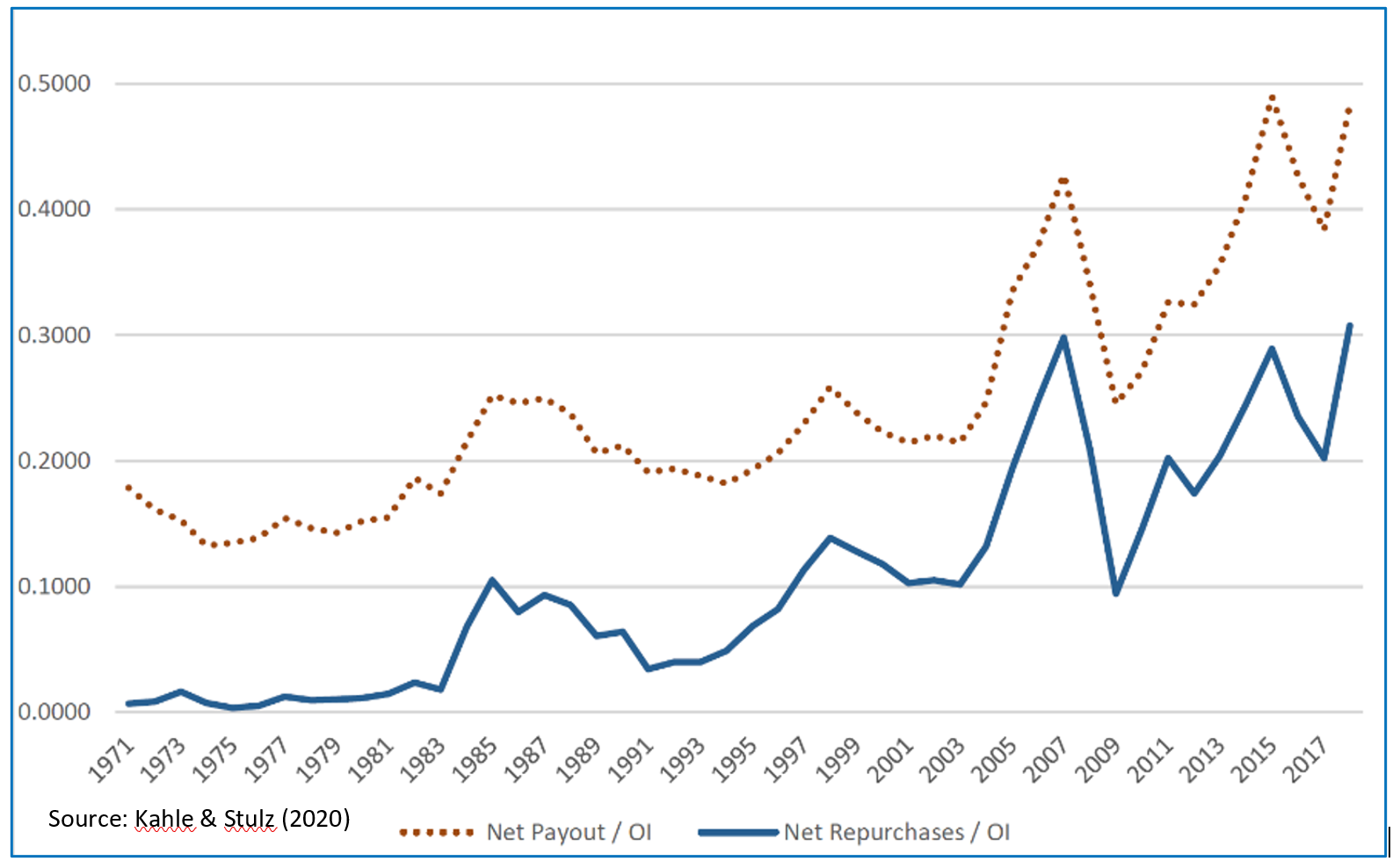 The upward trend in the payout ratio reflects choices made over the years by company managers.  Broadly speaking, they can use their cash in three ways; they can “return capital to shareholders”, in the form of share repurchases and dividend payments (as depicted in Figures 3 and 4);  they can make investments in their operations, which presumably increases productive capacity and worker productivity; or they can make acquisitions.

Some readers will ask why I don’t include “pay their employees more” among the options.  In practice, no matter how profitable they are or how much cash they have available, companies rarely increase overall compensation beyond what’s required to keep pace with inflation.

One reason is that the claims of shareholders, as owners of companies, are prioritized over those of workers (at least in America – other national systems aim for more of a balance between the interests of capital and labor).

Another is that firms operate under the assumption that they are already paying competitive wages.   Management will raise compensation rates if it becomes clear that this is no longer the case – for example, when they can’t attract workers or if turnover rates increase sharply.  This dynamic lay behind the recent well publicized decisions by big retailers to increase their minimum hourly wages.  But such moves are very much the exception to the rule: when corporate America was flush with cash as a result of the 2017 tax cut, aggregate compensation levels barely budged in subsequent years.

Returning cash to shareholders is politically controversial, since it can be taken as evidence that companies are favoring them (not to mention boosting the value of senior managers’ stock-based compensation packages) over investments that would benefit their employees and create additional jobs.

The paper’s authors attribute the bulk of the increased payout ratio to changes in the characteristics of the firms in the sample (chiefly that they have become more mature, and are thus in a cash-generative

stage of their growth), rather than nefarious decisions by company management to favor shareholders and themselves over investments and their employees.  The research behind this conclusion is sound, but I am sure we will be hearing a lot more on the topic, especially in an election year.

In closing, I’d like to offer a few words of caution concerning the comparison of cash flows into and out of the equity and bond markets.

The first is that companies “return” cash to bondholders in the form of coupon payments, just as they return cash to shareholders via dividend distributions.  Also, a portion of the $23 trillion in issuance represents the refinancing of maturing debt, rather the contribution of new funds by investors.

On the equity side, the NBER study measured the payouts to shareholders in 2017 dollars.  This has the effect of increasing the payout amounts shown in Figure 3 in the earlier years.

These caveats mean that the numbers I’ve cited overstate the gap between the level of funds that bondholders provide to companies and the amount that equity investors receive from them.

Another consideration is that it’s overly simplistic to assume that companies always use funds raised from bond issuance to invest in their businesses.  This is often not the case – for example, a popular use of the proceeds from bond sales is to fund share buybacks.

But when all is said and done, the centrality of the corporate bond market’s role in providing crucial financing for companies also remains unchanged, and firms still give a lot more money back to equity investors than they receive from them.  If anything, the bond market’s importance has increased as issuance has grown and the recession has made banks more cautious about extending credit to companies.   Thus, even more than in the past, if you want to know where the economy is headed, the corporate bond market is the place to look.