The Confidence Game: Covid, Consumers, and the Outlook for the Corporate Bond Market

The corporate bond market has reversed most of its pandemic-related first quarter decline, buoyed by Fed support, low interest rates, government programs to replace lost income and help businesses, and the assumption that the economy will bounce back quickly.  To a large degree, retaining and extending the market’s gains depends on economic activity returning to its pre-Covid levels   And with consumer outlays accounting for over 70% of GDP, this in turn relies on individuals having the confidence to resume their normal spending patterns.  Unlike the actions taken thus far to support the markets, this is something that cannot be dictated by politicians or central bankers.

As I discuss below, consumer spending is likely to remain depressed for some time to come.  If this indeed comes to pass, there is a strong case to be made that the corporate bond market is due for a correction.

I also borrow from a study involving Sweden and Denmark to show that the “choice” between opening up an economy so as to resume growth and shutting it down to contain the virus is a false one.  It might be a humbling lesson for state governors and the current administration, but in a public health crisis such as this, the decrees of political leaders can neither make virus go away nor force citizens to return to their offices, send their children to school, or patronize bars and restaurants.

The pandemic marches on

The pandemic is hitting the country on a rolling basis: New York is an example of a state where the pandemic peaked early and then declined (Figure 1a), while in Arizona the infection rate is rising sharply (Figure 1b).  This pattern raises the possibility that as travel picks up and people increasingly move from one region to another, states that have already passed through the eye of the Covid storm, so to speak, will see the incidence of infection begin to climb again.  Both considerations support the argument that the nation’s Covid-19 case rate will remain high for the foreseeable future, delaying the return of consumer behavior to pre-pandemic levels.

Another reason to fear that the worst is yet to come is that in states where the infection rate is climbing the broad pattern of consumer behavior has been slow to change.  Again taking Arizona as an example, the level of personal mobility, as measured by cellphone tracking, has only recently begun to decline (Figure 2a).

Logic suggests that this is a delayed response to the rapid rise in the state’s infection rate that began in June.  However, a comparison to data from New York (Figure 2b) clouds the picture.  It shows that personal mobility plunged when the pandemic’s toll mounted, then slowly recovered since then.  New Yorkers’ more recent pattern of behavior mirrors that seen in the Sunshine state, despite the fact that New York’s rate of infection remains low.  Thus, behavior in both states seem to be driven by the higher rate of reported cases on a national basis.  It remains to be seen if Arizonians’ activity will fall further in reaction to the rapid rise in cases at the local level.  If so, we can expect greater downward pressure on GDP growth. 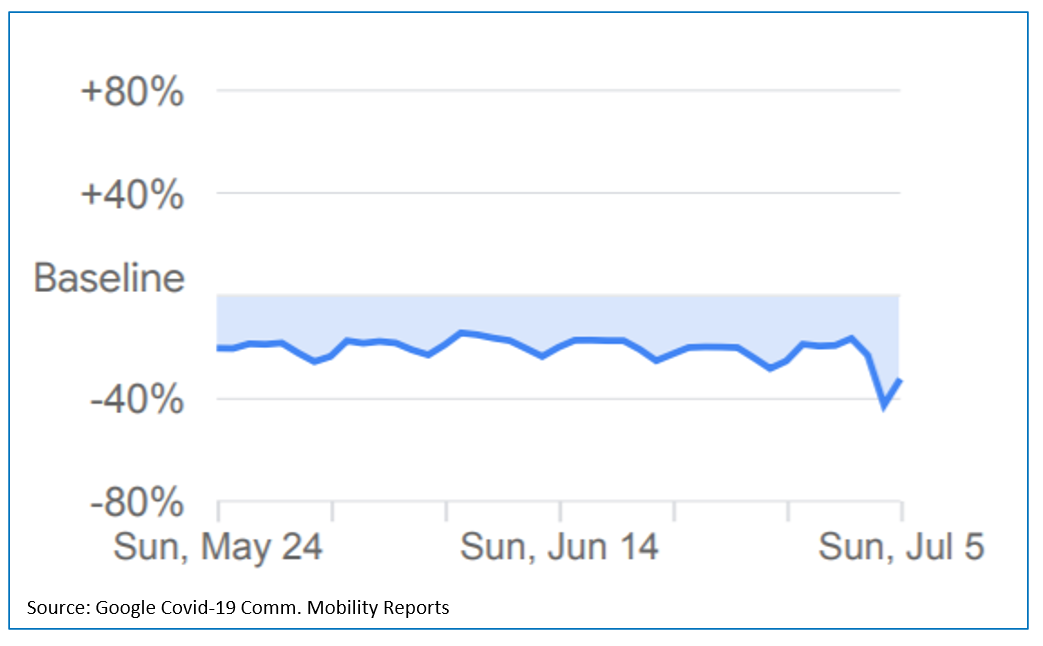 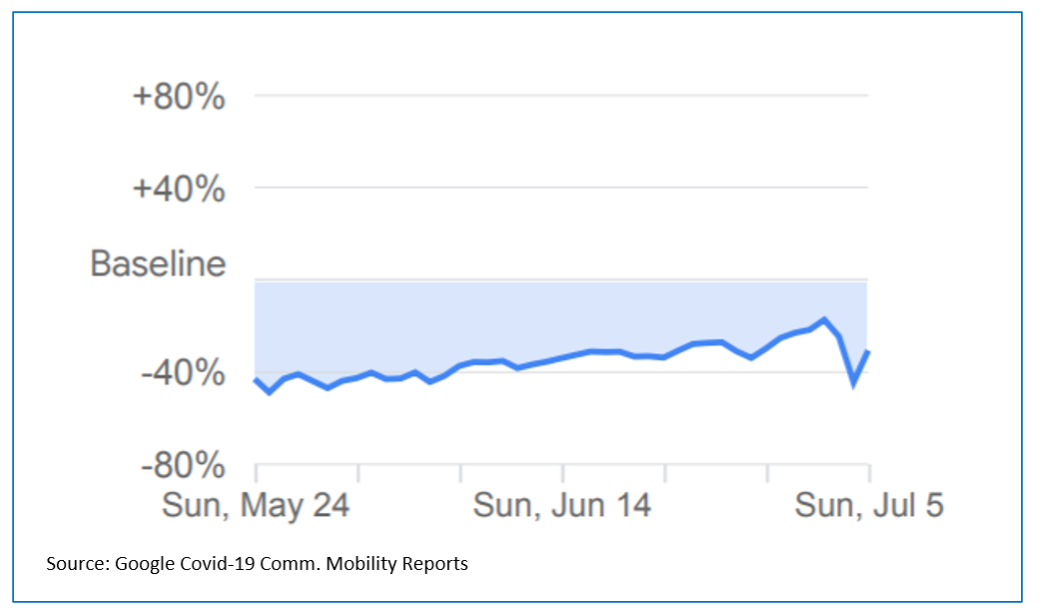 Restaurants can open, but that doesn’t mean people will show up

Returning to data for Arizona, on a more granular level we find evidence that Covid-related consumer behavior actually began a few weeks ago.

Data from Opentable shows the percentage of restaurants in their network that are open at the state level and the year-over-year change in the number of diners.  Figure 3 illustrates this for, again, New York and Arizona starting at the end of April.  A couple of things stand out from the data.

Figure 3: NY and AZ: % of restaurants open and Y-o-Y % change in seated diners 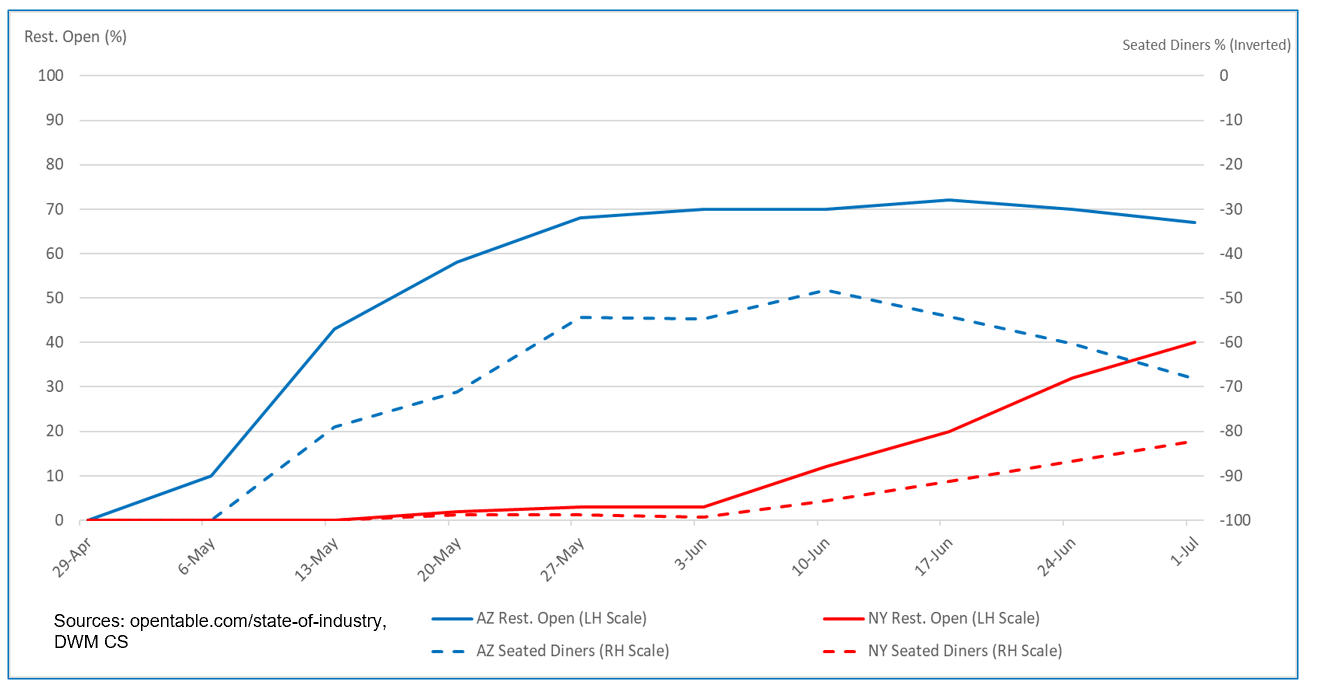 Firstly, the percent gain in the number of diners is considerably less than the percent change in the number of open restaurants. While this partly reflects capacity limitations and the like, it also illustrates the point that, to torture the catchphrase from the film Field of Dreams “you can build it, but they won’t necessarily come”.

Secondly, as I alluded earlier, in Arizona the number of seated diners started to decline in the second week of June, which lines up nicely with the accelerated rate of infection shown in Figure 1b.   When it comes to limiting the rate of infection this is all to the good, of course, but it adds to the risk of a slowdown in future economic growth.

Going to a restaurant is a particularly high-risk activity, involving sitting closely together with strangers, indoors, and for a prolonged period of time, so it’s not surprising that data related to it provides early signs of changed consumer behavior.  It also reminds us of the limited effect that government actions – in this case, decreeing that restaurants can reopen — have on what people actually do.  I expand on this point in the next section, using the contrasting experiences of Denmark and Sweden as an example.

Sweden and Denmark – going their own ways

Perhaps alone among the countries facing the pandemic, Sweden chose not to shut down its economy or to enforce social distancing.  Schools, restaurants, bars, and offices, all remained opened.  The government instead relied on the country’s strong health system, it high level of social cohesion, and the expectation that Swedes would “behave sensibly” to see them through the crisis with a minimal loss of life and a minimal reduction in economic activity. 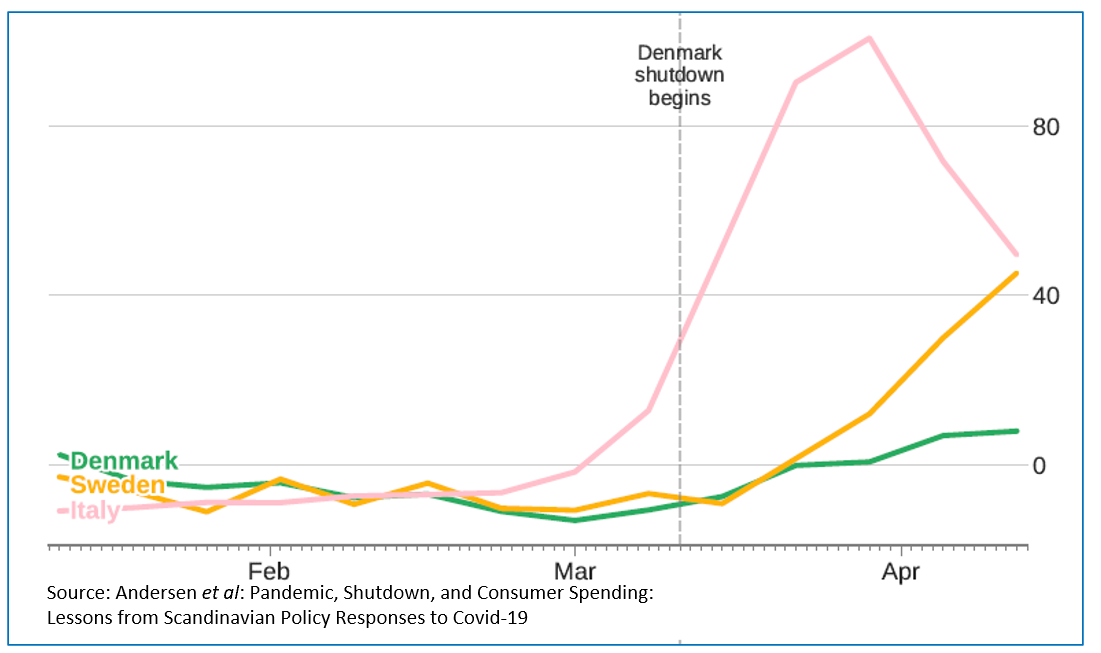 In contrast, Sweden’s neighbor Denmark followed the common path of suspending economic activity (including closing schools and offices), to contain the pandemic, and recorded a significantly lower rate of death (Figure 4).  And to add insult to injury, Sweden also experienced a greater year-over-year decline in consumer spending (Figure 5). 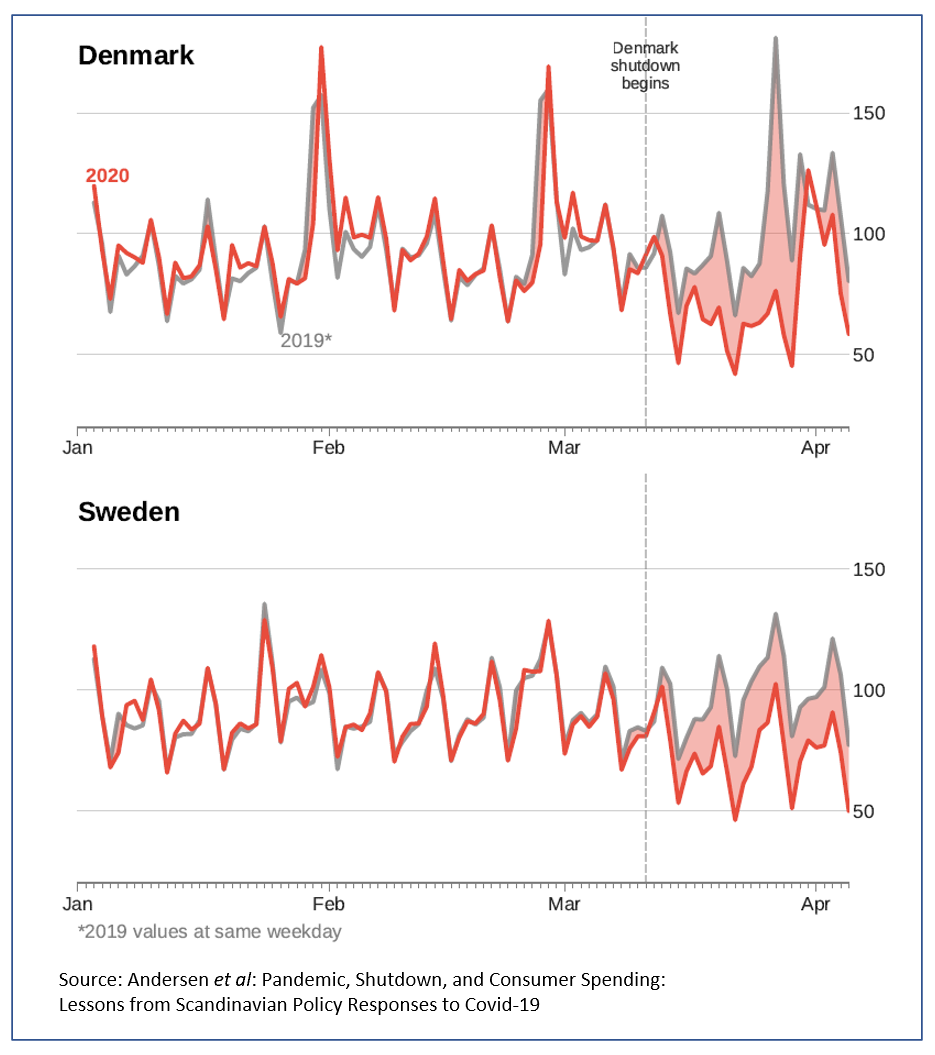 Thus, the strategy of staying open during the pandemic left Sweden with the worst of all outcomes.  The sorry tale reminds us that in these troubled times it all comes back to confidence.  While the government’s failure to suspend economic activity led to a tragic rise in the death rate, citizens’ concerns about their personal safety and financial security led them to cut their spending, hurting the economy anyway.

The result will likely be a prolongation of Sweden’s economic and human suffering.  It’s a lesson that US policymakers and bond markets participants ignore at their peril.