After a spate of downgrades in the leveraged loan market, more than a third of the sector is rated B- or below — a record level.  Despite this, after falling by 21% on the news of Covid-19 outbreak the S&P/LSTA Leveraged Loan Index has now regained almost all of its losses.  The story is the same in the high yield market, where credit spreads have retraced much of their earlier increase.

The rallies are in line with the broad recovery of stock and bond prices, and reflect the benefits of the Fed and government assistance programs and low interest rates, as well as the belief amongst many investors that the economy will recover quickly from the recession that began in February.

These are reasonable considerations.  But as I explain in the balance of this post, in times of economic stress there’s a nasty “leverage effect” built into the historic pattern of defaults for risky debt, one which exacerbates the downside risk for investors during recessions.  Given the degree to which loan and bond prices have recovered, I think this poses an underappreciated risk to current valuations, especially if the economic recovery turns out to be slow and halting.

Prices of high yield bonds and loans fluctuate, so as with all traded assets there’s money to be made by buying low and selling high.  But unlike the case with equities, where there is no limit to how far prices can increase, in most cases bondholders and lenders receive no more than the par value of their holdings at maturity.  And with non-payment of interest and principal a real and present danger for investors, especially for high yield assets, the distribution of returns is skewed to the downside.  All this makes default a major consideration in evaluating the trade-off between risk and return for high yield bonds and leveraged loans.

Ratings from Moody’s, S&P, and Fitch do a good job of rank ordering default probabilities by rating category (Figure 1), so the credit markets use them as handy proxies for default risk.  The greater default rates on lower rated debt means that on average such issues trade with higher risk premia, as represented by credit spreads.  And as I described in an earlier post, all things being equal higher spreads mean higher yields and thus lower prices.

Nowadays, bonds and loans rated BB+/Ba1 and below are termed “high yield” or “speculative grade”.   But this wasn’t always the case.  For many years the widely used, if less polite, way to describe these securities was “junk bonds”.   They were further divided between “junk” (issues rated BB/Ba) and “real junk” (rated single-B and CCC and below).  A glance at the long-term average default rates in Figure 1 shows why – there’s world of difference between having less than a 1% risk of default in the Ba category, vs. 4% for single-B and almost 13% in Caa-C.

A second aspect of the junk vs. real junk divide concerns the degrees of difference between long-term average default rates per rating category and large variations in default rates on a yearly basis, especially during recessions.

It’s easy to understand why many market participants focus on long term average default rates — the basis for their construction is intuitive, and they anchor many firms’ credit risk management frameworks.  But like most averages, default rates conceal wide variations in their inputs (Figure 2).

As would be expected, default rates are much higher during recessions, such as those that occurred in 1990, the early 2000s, and 2008/2009.  Defaults usually peak well after the economy has entered a recession, a point I return to below.  This reflects the trailing basis on which default rates are calculated and the time it takes for an economic downturn to lead to a spike in bankruptcies.  Consistent with this, the current recession began some four months ago, but so far high yield default rates (which are updated monthly), have only increased modestly. 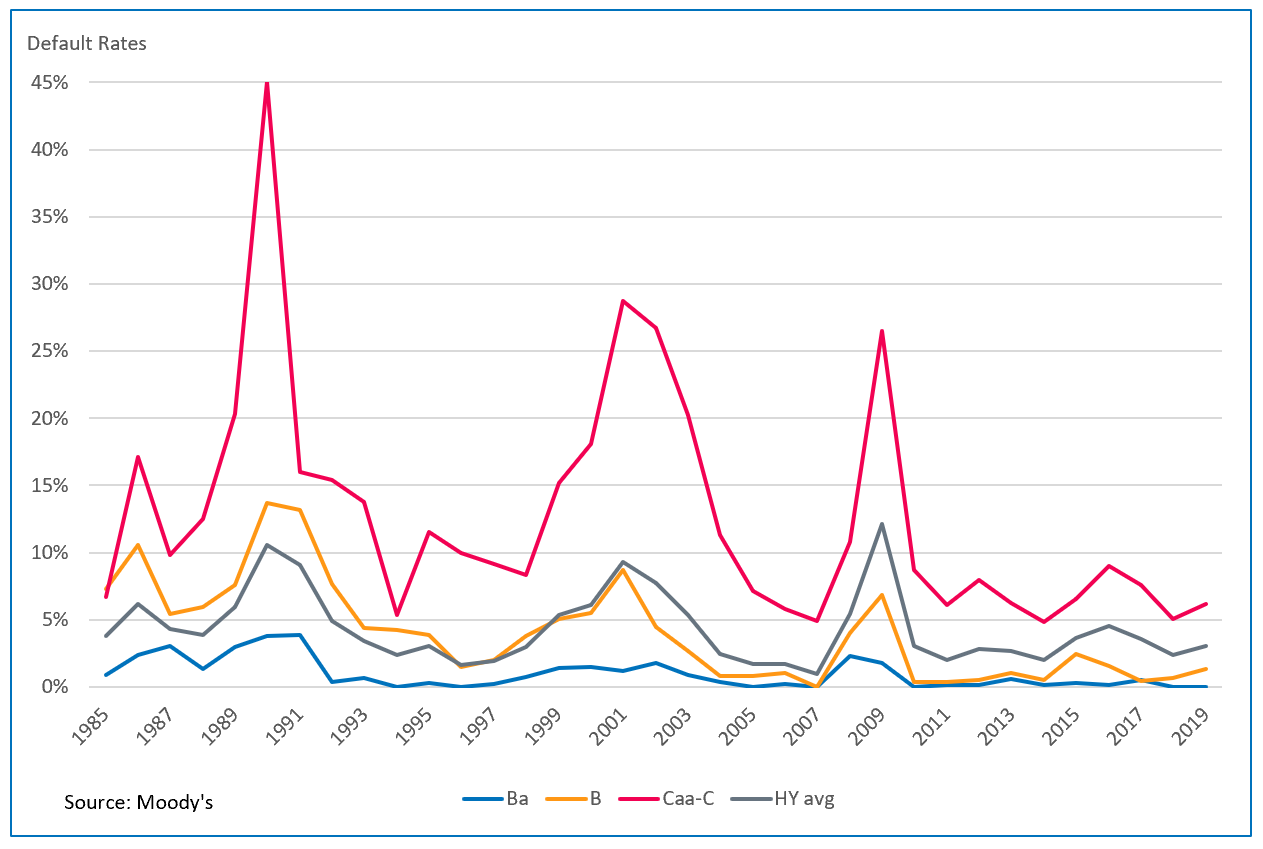 Another takeaway from Figure 2, one that is central to the case I’m making for the importance of “default leverage”,  is that during recessionary periods the Caa-C default rate rises by a lot more than the increases for single-B rated debt, which in turn jumps by more than that for the Ba category.

Figure 3 highlights these relationships by comparing each letter grade default rate to that for the entire high yield market, with the gaps measured in terms of percentages.  For example, at its peak following the financial crisis the Caa-C default rate was 15 percentage points higher than for the high yield market as a whole (27% vs. 12%).  This was around double the average differential between 1985 and 2019.  But contrast, the Ba rate was 10 percentage points under the market-wide metric (2% vs. 12%). 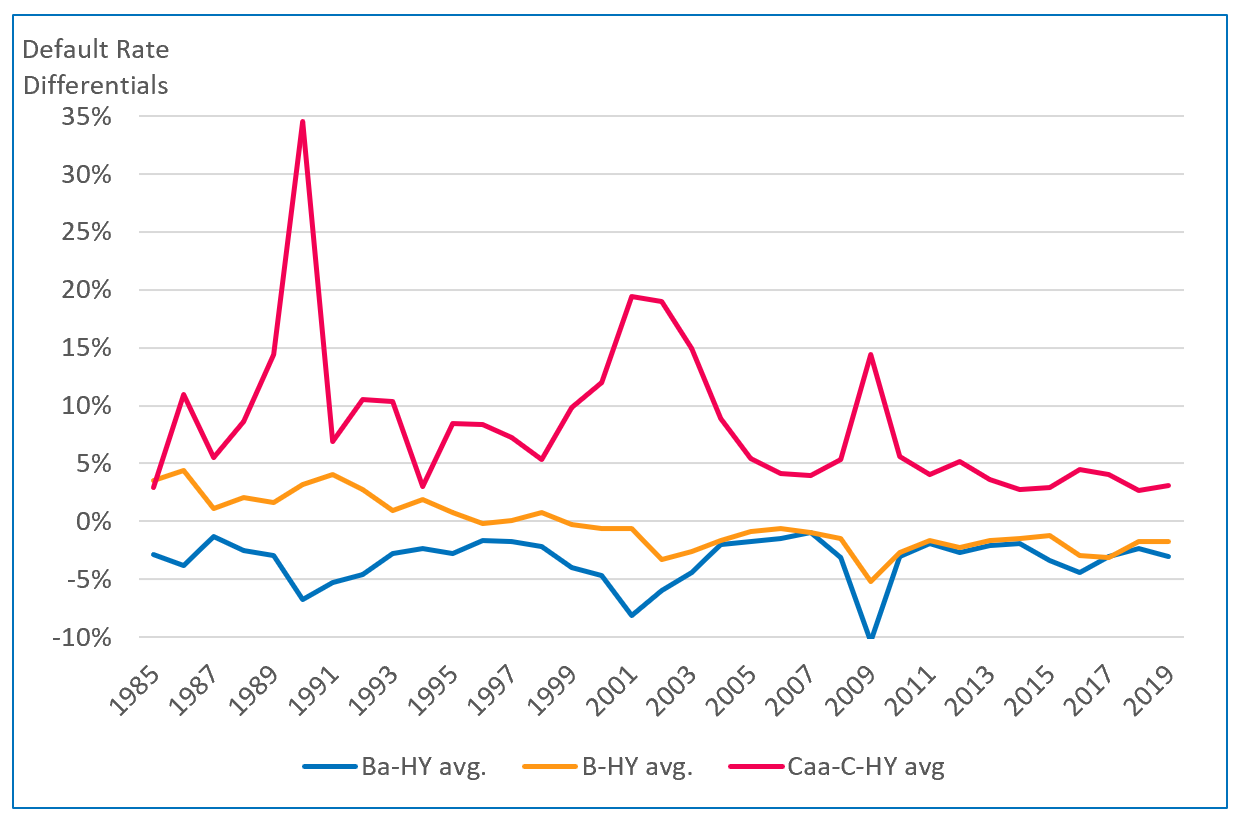 Beware of the “default leverage effect” on market prices

Default rates are almost certain to increase in the months to come.  And if history is any guide, the rise will be a lot greater for bonds and loans rated at the bottom of the rating scale.  This is all well understood, so it’s likely that current prices in the leveraged loan and high yield bond markets incorporate such a scenario.  However, the recent price action indicates that valuations also assume that defaults will top out at relatively modest levels (at least in light of the severe contraction in the economy), and then begin to decline in short order.

This happy outcome will largely depend on a relatively quick economic rebound.  Failing this, the high yield default rate will probably rise above the level experienced in 2009 and could well stay there for a number of months.  Single-B and CCC-C default rates would then rise still further, and the “leverage effect” would kick in.  Moreover, it would be compounded by the record level of debt at the bottom of the rating scale.

A greater than expected rise in defaults is always bad for market values.  But I think the “default leverage effect” is a hidden factor that could make the price decline resulting from a surprise jump in the default rate all the more painful.