Main Street vs. Wall Street: Explaining the Divergence between the Financial Markets and the Economy

If you are managing to remain calm while everyone else is in a state of total panic, it means that you just don’t understand the seriousness of the situation.

US Navy saying, adapted from Kipling’s “If”

The stock market has rallied since the end of March, even though the US economy faces the worst crisis since the Great Depression.  The corporate bond market, another bellwether of corporate America, has also performed much more strongly than the grim economic outlook would suggest.  Is this because the markets simply “don’t understand the seriousness of the situation” in the form of the terrible economic and social consequences of the pandemic, or are there other factors at work?

As we discuss in the balance of this post, the performances of the two markets reflect drivers that are rational in market terms, even if they are providing more positive, possibly misleading, signals of the outlook for the US economy.  The stock market’s bounce mainly reflects the skew inherent in market capitalization-weighted indices, while the relatively strong performance of the corporate bond market is due to the Fed’s asset purchase programs — although as we will see, this has not extended to a reduction in investors’ concerns about default risk.

For equities, the benchmarks in the headlines are not the “the market”

I usually focus on the capital and credit markets, but equities have been more in the headlines so I will start there.

All markets are forward-looking, so one explanation of the dichotomy between the stock market’s recovery and the rapidly sinking economy is that the former is pricing in a swift and strong rebound.  There’s a lot to this, but it’s also important to recall that the widely followed metrics of market direction, such as the S&P 500 Index, contain enormous variations in the performance of sectors and companies.  Moreover, most benchmarks are calculated on the basis of their constituents’ market capitalizations, with the result that a few big and successful companies can drive the performance of benchmarks purporting to represent the broad direction of the market and the economy.  To a large degree the S&P 500’s rebound reflects stock price increases for a handful of dominant, mostly tech-oriented, companies that have performed well in the crisis, specifically Microsoft, Apple, Alphabet, Facebook, and Amazon.  The market capitalizations of these five firms now make up around 20% of the S&P 500’s value.  Most other companies’ shares have declined since the pandemic began, which is more indicative of what’s happening in “the real world”.

A sector-based analysis of the market’s performance provides further evidence that taking a granular view of the market produces insights that are intuitively sensible.  Thus, since the crisis began shares of consumer staples companies, such as packaged foods producers, have posted much better returns than those of energy producers or banks.

Bond benchmarks are also weighed by the market value of their constituent securities.  But bonds have a different pay-off profile for investors than equities, which limits how far their prices can rise.  This in turn dampens considerably the influence of the largest and strongest issuers in the indices.

Recall that bonds mature at their face, or original, values.  To understand the significance of this, let’s take the case of a company whose performance and creditworthiness have improved recently.  This is good news for holders of its bonds and pushes up their prices in the market.  But since bondholders get no more than the bonds’ face values when they mature, as each issue approaches its maturity date its market price falls so that it eventually equals its face value – this is the so-called “pull to par” effect.    By contrast, the sky is the limit for share prices, leading to the aforementioned dominance of equity benchmarks by a small number of large and successful companies.

The pull to par effect means that the divergence between the corporate bond market and the economic outlook isn’t due to the market cap-weighted nature of the benchmarks.  Rather, to a large degree it reflects the Fed’s programs to support the market by purchasing securities (the forward-looking nature of the market also plays a role, of course).  The Fed’s interventions have limited the rise in credit spreads (and thus the fall in bond prices) for both investment grade and high yield debt compared to what happened during the financial crisis (Figure 1) which, in my opinion, has made the world appear to be a safer place than it really is.

Figure 1: Investment Grade and High Yield Credit Spreads (through May 11, 2020) 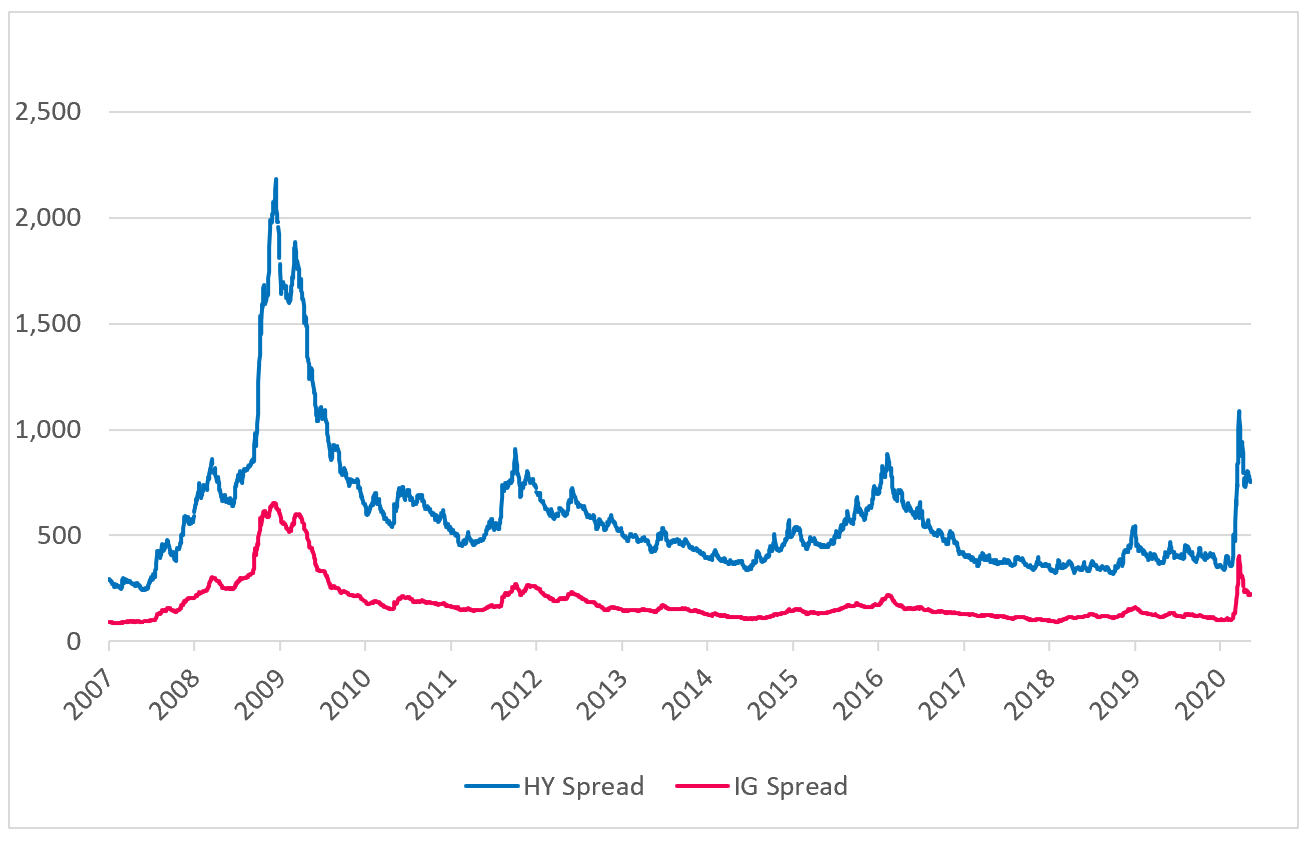 While the Fed’s asset purchase programs have been successful, they have led to concerns that averting a financing crisis in this way will prove to be a lot easier than avoiding a spike in defaults.  Although it isn’t obvious from Figure 1, a closer look at the data indicates that many high yield bondholders share these worries.

When corporate bond markets start to rally, investors typically buy lower rated debt aggressively, since such bonds offer the most price upside.  Figure 2 shows the reductions in credit spreads from their peak points during the financial crisis and pandemic to their troughs (following the financial crisis) or their latest levels (for the current crisis) for AA, BB, and single-B rated bonds.  (Recall that reductions in spreads usually reflect investors’ reduced expectations of default risk.  Also, all else being equal, spread reductions increase bond prices.)

As expected, during the two crisis periods the spread deltas for high yield debt (BB and B) were much larger than for AA rated bonds.  To adjust for the wider spreads on lower rated debt Figure 2 also expresses the deltas on a percent basis.  During the financial crisis the spread changes in percent terms were closely aligned.  Not so now – in percent terms the spread deltas are significantly smaller for high yield bonds than for their AA rated counterparts.

My takeaway from this is that while corporate bond investors are happy to “buy what the Fed is buying”, they are not doing so indiscriminately.  That is, even as they accept that the central bank’s asset purchase programs have reduced refinancing risk, they have not discounted solvency risk to the same degree.  Given that many of the first and second-order effects of the crisis have yet to manifest themselves, my suspicion is that their concerns will turn out to be amply justified.