Signals from the Oil Patch: Credit Spreads and the Fed’s Support for the High Yield Market

David Munves, CFA, blogs on developments in the credit and capital markets, as well as marketing strategies to support the sales of complex B2B financial products to banks, asset managers, insurance companies, and corporate credit departments.  His provides strategic marketing advice and sales enablement services, including content creation, to vendors of financial products.

In a previous post I argued that credit markets provide more meaningful, and usually more accurate, signals of the underlying health of companies and the economy than equities, but that they were being distorted by the Fed’s support programs.  In this post I lend support to the thesis by analyzing the relationship between energy spreads and the price of oil, and by comparing credit spreads on high yield energy bonds to those for the broad market.  The main takeaway is that credit spreads for energy bonds have not risen by nearly as much as would be expected by the recent collapse in oil and gas prices, something that I attribute in large part to the central bank’s bond purchase programs.  We see the same pattern of a more muted than expected spread increase in the high yield market as a whole.

The implications are significant for investors and others who look to the financial markets to provide guidance about the outlook for the economy.  The Fed’s support programs have been successful in reducing the risk of a financial crisis and keeping the credit markets open – indeed, issuance boomed in April.  But because of the steps taken by the bank, the markets are not fulfilling their customary role of providing forward-looking indications of corporate creditworthiness.

In the longer term the Fed’s actions cannot relieve the severe downward pressure on corporate creditworthiness due to the pandemic.  There’s a real chance that when it comes to default rates and the like, the worst is yet to come — that sooner or later, gravity will reassert itself.

Energy bonds and the price of oil

Bonds sold by energy companies make up around 15% of the high yield market.  This has remained constant for the past decade, although issues sold by relatively weak, capital-hungry frackers now make up a larger share of the total.  As Figure 1 shows, there have been two recent periods when energy prices weakened sharply.  In the first quarter of 2016 the price of oil fell to $32 per barrel (bbl), causing the sector’s average spread to balloon to 2,000 bp (note that in the Figure the scale for the price of oil is inverted, so an upward move in the red line represents a period of price decline).

Figure 1: High yield energy sector spreads and the price of oil (through May 5, 2020) 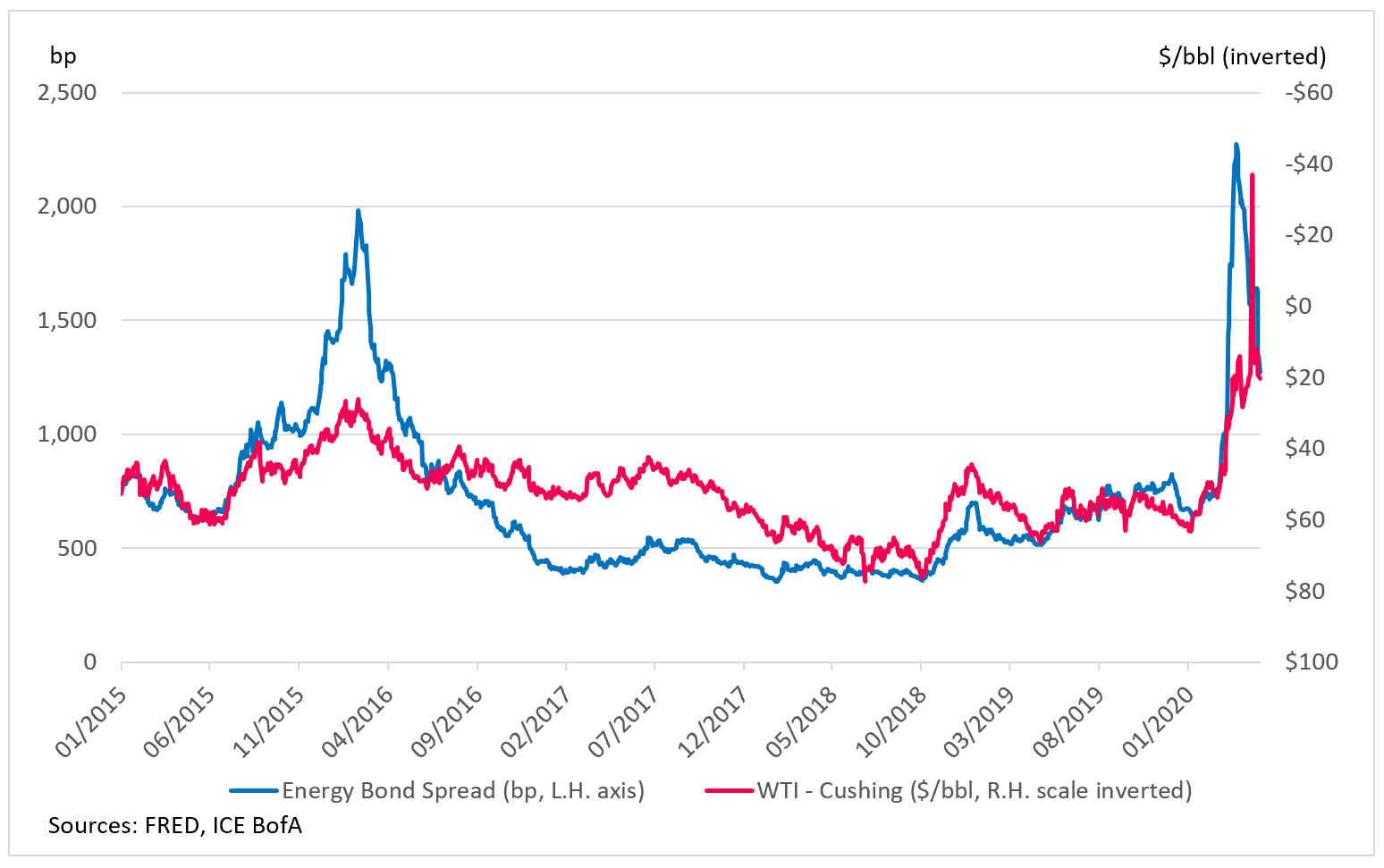 As I explained in an earlier post, credit spreads reflect investors’ perceptions of risk for a company or sector, with elevated metrics equating to higher risk levels.  For speculative grade bonds, changes in investors’ perceptions of default risk are the main drivers of spreads.  So the co-movement of spreads and energy prices (when the latter scale is inverted) is exactly what we would expect to see.

Fast-forward to the first quarter of this year, and the graph shows a price collapse that makes the events of 2016 look mild in comparison.  Moreover, even if we treat the briefly negative price of West Texas oil as a “technical” aberration, the $20.47 price per barrel as of May 4 is still well below 2016 levels.  Yet despite this strongly negative signal for energy sector creditworthiness, the bond market signal is more positive than in 2016: the current average sector spread is 1,232 bp, some 650 bp less than the 2016 peak.  Recall, too, that in 2016 we were in the midst of an economic expansion, while we currently face an outlook that could come to resemble the Great Depression, at least for a period of time.

Figure 2 reinforces this point by comparing the average high yield energy spread to that of the broad high yield market, with the time series starting in 2007.  Each of the three spread peaks tells a different story.

Figure 2: High yield market and energy sector spreads (through May 5, 2020) 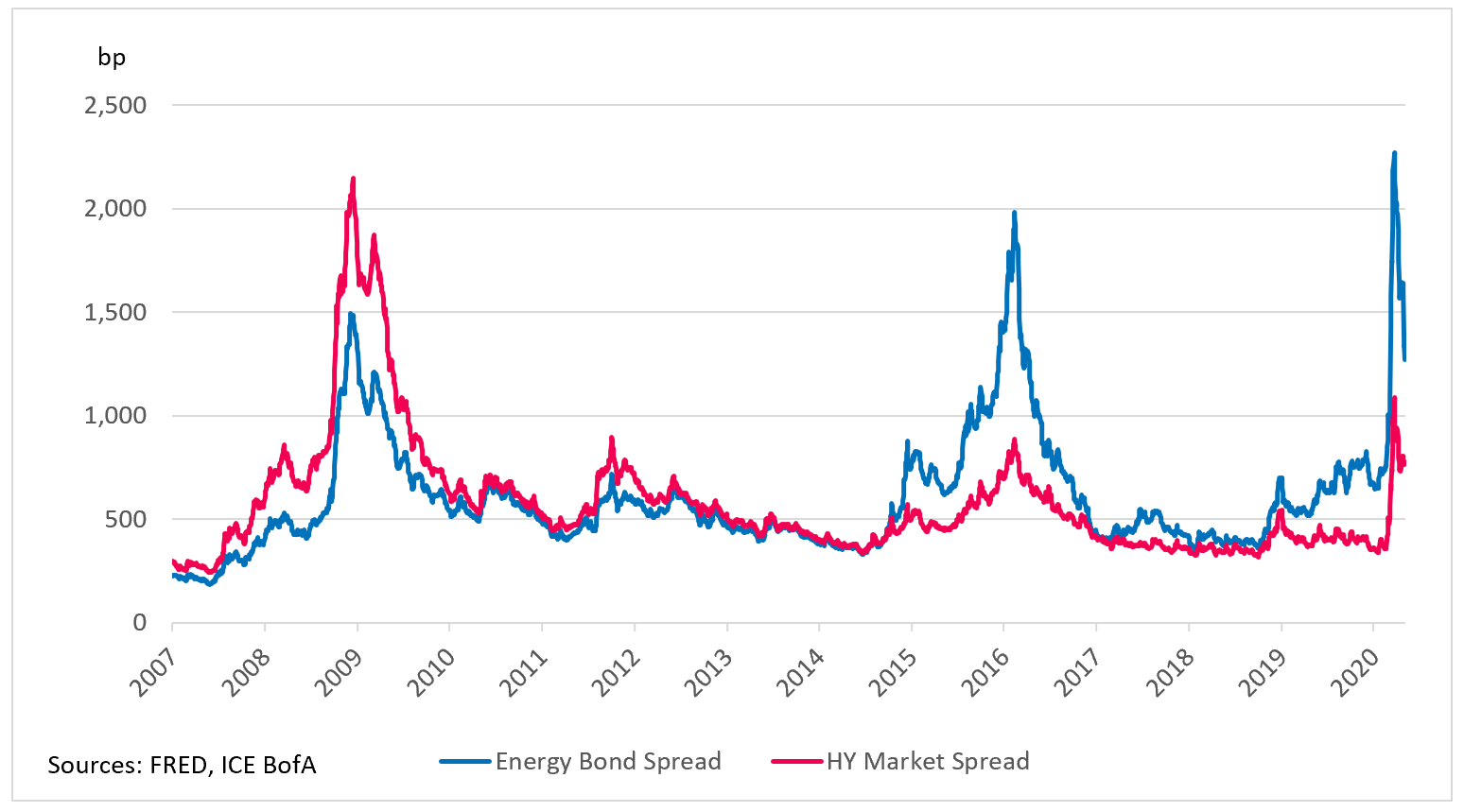 The first, in 2008-2010, reflects both the financial crisis/Great Recession and the decline in the price of energy from $145 per barrel to $36.  The high yield market tracked the first development (which caused a jump in default rates), while energy bonds tracked the second as well – much as would be expected.

We have already discussed the 2016 energy spread blow-out.   Figure 2 shows the large gap then between the energy sector and the broad market – the latter rose then, but not by much.  The reason, of course, is that the economic expansion was chugging along, so the financial and market stress was largely limited to the oil patch.

What’s noteworthy about the current crisis is the limited rise, and swift recovery, of the average high yield spread.  At 779 bp on May 5, it’s now below the early 2016 peak of 887 bp, when the spread increase mostly reflected the risk that the oil sector’s problems would prevent other entities from accessing the market or refinancing maturing bonds.  It’s hard to attribute this to anything other than the Fed’s interventions, plus an optimistic view of the speed of the eventual economy recovery.

The credit markets are forward looking, like all exchanges, and the current recession could well prove to be short-lived and the rebound a sharp one.  For investors, “buy what the Fed is buying” is an imminently sensible strategy.  So there are good reasons for the relative rosy outlook being signaled by the credit sector, despite the economic and social carnage being experienced by so much of America.   In the coming months we’ll see if the markets’ optimism can withstand the onslaught of bad news around the economic contraction, the continued rise in unemployment, and decline in creditworthiness.  As I stated at the outset, I have my doubts.