The Corporate Bond Market: Providing Crucial Insights in the Age of the Pandemic

Times were very different when James Carville was grousing about the dominance of the bond market, but his point remains true today: the stock market gets the headlines, but when it comes to understanding what’s going on in the economy and corporate America, you’ve got to look to the bond market.

The COVID-19 pandemic has triggered an economic and social crisis, the likes of which have not been seen for a century.  Prices and other signals from bonds sold by companies and financial institutions in the “corporate” bond market speak to the risks of company survival, a baseline necessity for economic recovery, in ways that equities do not.  This blog will focus on analyzing the corporate bond market and its signals, with the aim of providing readers with fresh insights into the impact of the pandemic and the outlook for the US economy’s emergence from its deep slump.

To date the corporate market’s headline message is that the pandemic’s impact will be significant, but not catastrophic.  But as I discuss below, the market’s signals have been distorted by the Federal Reserve Bank’s actions to support the market and ensure liquidity, something that is clear from a comparison with equity market metrics.  And as with any market analysis, there’s also the question of what’s priced into current levels.  Following the recent market rallies, the concern in this regard is whether investors are taking too rosy a view of the path forward.  (Spoiler alert: I think this is the case.)

Companies depend on the bond market to raise funds, and their reliance on it has increased due to the shrinking role of banks since the 2008-2009 financial crisis.  So when the market is severely disrupted, many firms will not survive for long.  Not so for the equity market, where the money flows the other way: over the past decade companies have paid out a lot more to investors via stock buybacks than they have received from selling new shares.  Thus, counterintuitive as it might sound, for most companies the gyrations of the stock market have zero impact on their day to day operations.

Another reason to pay close attention to corporate bonds is that their prices are closely aligned with company survival.  Declines in bond prices, particularly for riskier companies, are strong indications of an increased risk of bankruptcy – by definition an existential threat to them, and one with severe knock-on effects for workers and for the economy.  By contrast, the relationship between most entities’ share prices and their risk of bankruptcy is tenuous at best.  A risky company’s shares can skyrocket if it has excellent growth prospects, while at the opposite end of the spectrum firms that are quite safe, but that are in stodgy industries (think electric utilities), typically have underwhelming equity performances.

Before delving into an analysis of corporate bond market signals, to ensure that all readers are on the proverbial same page, in the next section I provide a brief review of corporate bond basics for those in need of one.

When it comes to the corporate bond market, one of the key concepts is the credit spread (or simply, “the spread”).  This is the extra compensation that investors require to buy a corporate bond, with its attendant risk of default, instead of a comparable government security which (presumably) has no default risk.  (“Default” in the bond market is commonly defined as the failure of the company that sold the bond to pay on time the coupon amounts and repay the face value, or the principal, of the bond.)

Let’s take as an example a corporate bond with a yield of 7%.  A bond’s yield is the expected annual total return that an investor receives for holding it.  The total return has two components: 1) coupon payments to the bondholder, expressed as a percent of the bond’s original value; and 2) a portion of the difference between the market price of the bond and its face value, i.e., the amount that will be repaid to the investor when the bond matures.  If a government bond with the same maturity date as our corporate bond has a yield of 2%, then the corporate bond’s spread is 5% (7%-2%).

So how do changes in investors’ perceptions of default risk feed through to changes in the interrelated bond metrics of spreads, yields, and prices?

Spreads, especially for riskier companies, move in line with investors’ perception of default risk: when it rises, spreads go up.  Since a bond’s spread is a component of its yield, a higher spread means a higher yield.  For reasons that aren’t worth going into here, bond yields and prices move in opposite directions – an increase in a bond’s yield leads a drop in its price, and vice versa.  This is an important relationship, because while spreads are a key signal of default risk, investors buy and sell bonds on a price basis.  But the two metrics get you to the same place, in that increased default risk results in both higher spreads and lower prices.

A final point is that since default is a future event that may or may not happen, any estimate of it for a given company is just that – an estimate or, less politely, a guess.  In the world of corporate bonds, credit ratings from agencies such as Moody’s, Standard & Poor’s, and Fitch provide a common shorthand for estimates of default risk.  Bonds with low estimated default risk are termed investment grade and have ratings of Baa3/BBB- and above.  As lower risk securities, they tend to have lower credit spreads and thus lower yields.  Issues with low ratings (Ba1/BB+ and below) usually have higher spreads and yields and are classified as high yield, speculative grade, or junk bonds.

With these preliminaries out of the way, we can now turn to corporate bond market signals.  Spreads on investment grade and high yield bonds have rose sharply when the scale of the pandemic became evident, with the latter reacting more strongly than the former (Figure 1).  They have now partly recovered for reasons I discuss in the next section.

But despite the catastrophe facing the economy and millions of workers, at its peak the average high yield spread did not risen by nearly as much as during the 2008-2009 financial crisis.  One reason is that the current crisis is different from the last one: during the financial near-meltdown the credit markets were at the heart of the disaster, so it’s not surprising that a credit-focused metric like the average high yield spread blew out.  This time around, the corporate bond market is more in the position of suffering collateral damage from an exogenous event.

A second reason for the relatively limited spread widening is the one we stated at the outset, namely the Fed’s programs to support the markets, including buying investment grade and high yield bonds.  These moves have supplied crucial liquidity to the market and raised investors’ hopes that a financial catastrophe can be avoided.  This is highly significant in market terms, since a meltdown would block companies from selling debt and trigger a wave of defaults.  However, ensuring functioning bond markets is a different, and arguably easier, matter than avoiding a deep and long-lasting recession.  The unprecedented nature of the crisis, particularly its sudden and severe impact on individuals and businesses of all sizes, makes me think that we’ll achieve the first (relatively) happy outcome, but I’m far less sanguine about the second.

A tale of two markets and two types of government support

In addition to the Fed’s liquidity programs, the bond and equity markets have been supported by various Federal packages to aid workers and companies.  We now consider their impact as well and assess the degree to which the bond markets have benefited disproportionately.

Figure 2 shows the average high yield spread and the VIX Index of S&P 500 option volatility.  The VIX, commonly called the “fear index”, is used by equity investors to hedge against market declines, so it typically moves inversely to stocks.  Since the VIX captures the level of risk aversion amongst equity investors, it provides a good analog to a risk-sensitive bond metric like high yield spreads.  Reflecting this, the correlation coefficient of the time series is 80%.  Notably, they even tracked each other closely during the credit markets-centered financial crisis.  This makes the recent breakdown of the relationship, with the VIX shooting up by a much greater amount than the high yield spread, and then recovering sharply, all the more noteworthy.  I believe that there are two drivers of this divergence. 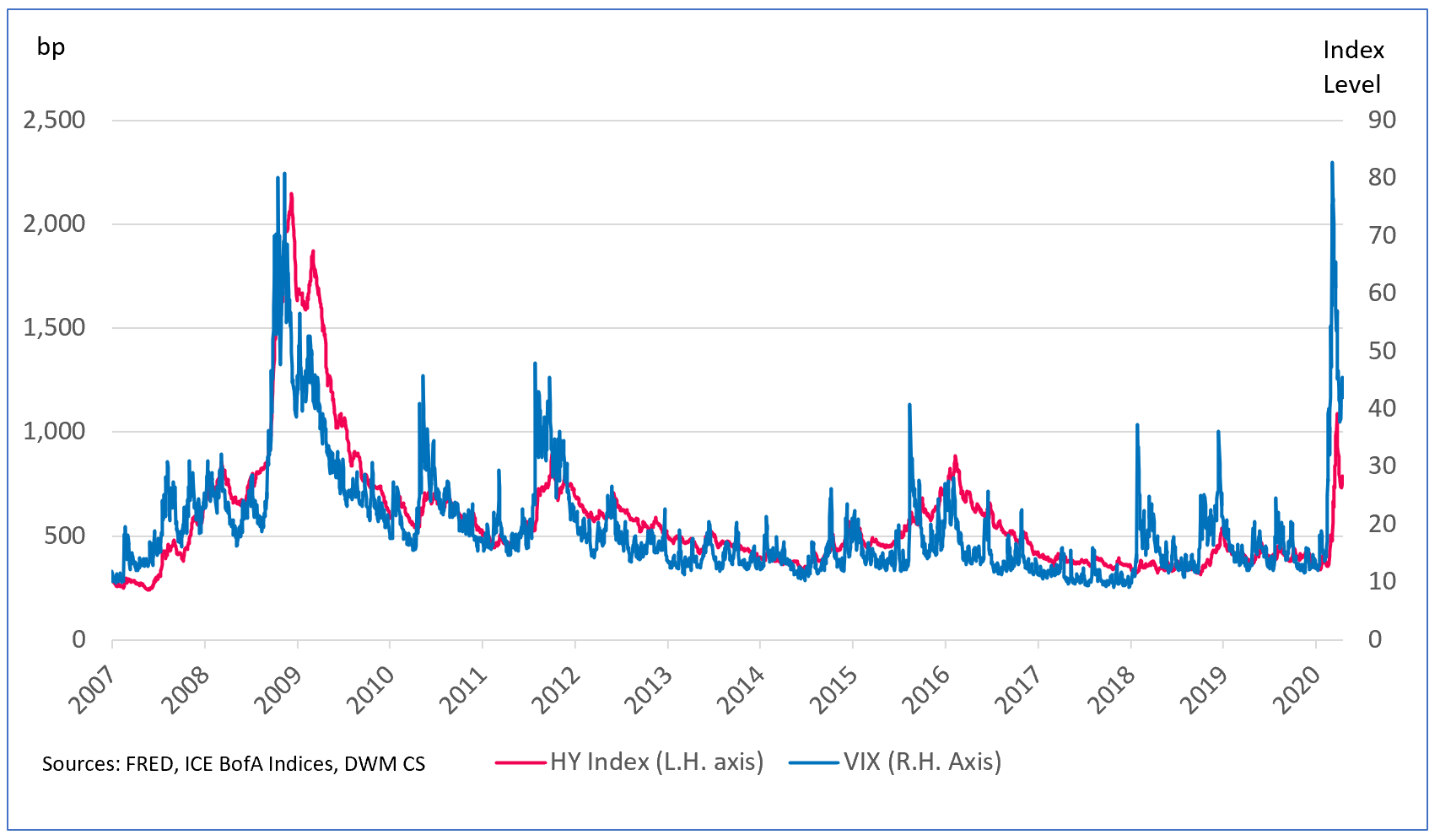 Firstly, as noted the Fed’s actions indeed helped, and will continue to help, the corporate bond market. This has contained the spread widening and underpinned the recent rally. Crucially, it has muted the signals concerning default risk that would have otherwise come from high yield spread levels.  It’s impossible to say by how much, but it would seem to be a significant amount.  The comparison with 2008 is tells us that much.

The second factor in the divergence between the VIX and high yield spread is the varying impact of the economic support packages passed by Congress.  To be clear, equity investors and bondholders alike want to see companies survive and prosper, so the government’s actions are positive for both markets. However, share prices are usually more volatile than bond prices, mainly because shareholders have more upside and downside than bondholders. This likely contributed to  the VIX Index’s extreme moves compared to the high yield index, which hadn’t risen by as much in the first place, at least partly because of the aforementioned support provided by the Fed.

The VIX index is now back to around the same level as during the first quarter 2016 oil price collapse, while the high yield spread index is under it. This is noteworthy, since in many ways the events of 2016 were much less serious than the challenges we’re facing today.  For the bond markets, a good part of the recovery is due to investors following the strategy of “buying what the Fed is buying”. Also, as forward-looking indicators the markets are no doubt incorporating the fact that some regions of the country are beginning to reopen, if in a tentative way. Nonetheless, the markets’ rebound strikes me as an optimistic read of the situation. The economic damage to individuals and businesses large and small has been severe, almost beyond belief, and many of the second and third-order effects have yet to manifest themselves. It’s far from certain that the government support packages, enormous as they are, will be able to compensate for the damage.

Default risk in the months to come

As noted, the limited initial rise and subsequent decline in high yield spreads means that the bond market is forecasting a relatively modest increase in the rate at which companies will default.  While spread levels partly reflect the Fed’s market support actions, they also incorporate investor optimism regarding the speed and strength of the recovery.  If this turns out not to be the case, default rates will be much higher than currently forecast.  I will explore this topic in a future post.