Dispelling some myths about credit ratings

Credit rating agencies have been called a lot of things over the years, but “dodgy boilers” (per a recent article the Financial Times) has to be a new one.  The journalist leaned into the simile because just as a faulty boiler can blow up a house, so can the prevailing flawed (in his view) rating agency business model destroy the global financial system.

The article revisits familiar topics such as the conflicts of interest allegedly embedded in the agencies’ business structure, whereby issuers pay for their own ratings, and the performance of the US subprime mortgage market during the 2008 financial crisis, when many highly rated issues defaulted.

Such topics have been argued over for years, and we see no profit in relitigating them.  But we do object to two other statements in the article.  The first is that “rating agencies essentially use backwards-looking methodologies”.  The second is that “investors will continue to put blind faith in agencies’ credit ratings”.  Both beliefs have been around for a long time, and both are wrong.  We think that an improved understanding of these points helps to clarify the roles of rating agencies and institutional investors in the debt markets.   It can also help set expectations of their performance in future downturns.

Credit ratings: “The best lagging indicators on Wall Street”?
That ratings are backwards looking is accepted as an article of faith by many market participants.  There are many reasons for this, but an often-cited cause is that ratings move much more slowly than market-based metrics such as credit spreads, giving rise to the agencies’ unwelcome sobriquet of being of “the best lagging indicators on Wall Street’”.  But to borrow a concept from the tech world, this is a feature, not a bug.  That is, rating systems are managed so that changes in the metrics are directionally correct, with few “reversals”, i.e., when ratings are lowered and then raised quickly, or vice versa.  Ratings were never intended to move ahead of, or lead, markets, although this can happen.  By contrast, market-based metrics, like markets themselves, react quickly to news and are much more volatile.   Both systems have been used for years by investors and risk managers, albeit in different ways that reflect their different performance characteristics.

What ratings do and don’t do
The major agencies have long published statistics on default rates per rating category over different time horizons.  As we will see, these give lie to the idea that ratings are backwards looking.

Before getting into the details, it’s worth recalling that credit ratings claim to do essentially only one thing, namely rank order default risk.  Entities rated, say, single-A should default at a lower rate than those rated BBB, and BBB rated companies should default at a lower rate than those rated BB, and so on.   This construct allows for the possibility that highly rated entities will default (who can forget Lehman Brothers), but it also follows that such events should be exceedingly rare.  This wasn’t the case for the highly rated structured finance assets that defaulted during the financial crisis, but it’s held true for ratings assigned to “corporate” bonds, i.e., those sold by industrial, utility, and financial entities.

The standard methodology for determining default rates begins by grouping entities into rating categories at a given point in time.  The next step is to calculate how many defaulted in the following years, regardless of any subsequent rating changes.  So to determine the average single-A five year default rate, an agency buckets all single-A names together on, say, January 1, 2013, counts the number that defaulted between then and December 31, 2017, and divides the count by the number of companies in the group (or “cohort”) at the beginning of the period (after adjusting for withdrawn ratings and the like).  Default studies cover many years so thus consist of many individual cohorts.  The end results of the studies are cumulative default rates, expressed as percentages, for different rating categories and time horizons, with each default rate reflecting the average experience of its constituent cohorts.  A crucial point, which we touched on above, is that in most cases issuers will have been downgraded many times before they default, but are still grouped according to the ratings they had when their cohorts were formed.

The punchline is that average cumulative default rates per rating category exhibit the desired pattern of higher default rates on lower rated companies.  This holds over calculation horizons varying from five years (Figure 1a) to 10 and 20 years (Figures 1b and 1c).  Such outcomes, particularly over extended time horizons, are scarcely consistent with the claim that ratings are backward looking metrics.  Indeed, only by being forward looking can any risk measurement scale get these sorts of results.

Default rates per rating category can also be measured dynamically, as we do in Figure 2.  Most of the time lower-rated issuers defaulted at higher rates, and this for data spanning almost a century.  The periods when this pattern was violated, mainly during the 1960s, were times with a relatively small number of rated entities and a very limited number of defaults. 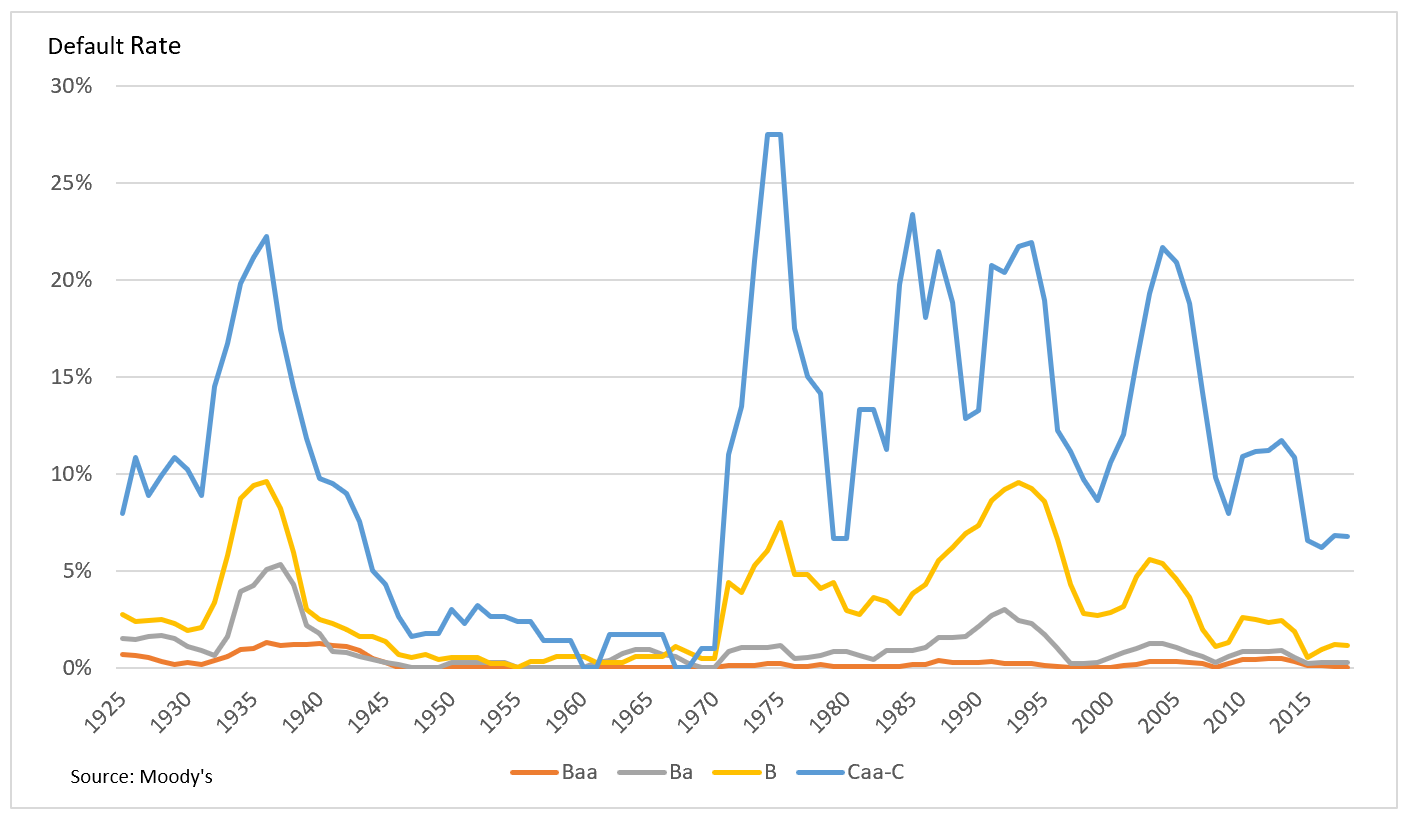 Institutional investors can, and do, make their own decisions

We now turn our attention to the claim that “investors will continue to put blind faith in agencies’ credit ratings”.   The corporate bond market is dominated by institutional players.  Such investors are broadly divided between passive asset managers who track ratings-based indices, and active managers who select bonds that they believe are attractive and reject those they believe will underperform.  Passive mangers follow ratings-based benchmarks, so by definition “put blind faith in agencies’ credit ratings”.  As for active managers, they are certainly aware of ratings: if nothing else, they usually can only buy bonds with certain ratings.  They are also consumers of ratings-related research produced by the agencies.  But it is not true that they rely blindly on ratings, something that is evident from bond prices.

Corporate bond investors are intensely focused on the risk of credit deterioration and default.  This makes their assessment credit risk – which is what ratings also provide – a dominant driver of corporate bond prices.  If institutional investors “put blind faith in ratings”, then issues with similar maturities sold by entities in the same sector and with the same rating should trade at very similar prices.  But we find the opposite: prices vary a lot among issues that are otherwise equivalent.  Moreover, the distribution of prices is skewed towards the low side, which is exactly what we’d expect from a decision-making process that focuses on downside risk in the form of credit deterioration and default.

We conclude by returning to the sorry tale of subprime structured residential real estate bonds.  Well before the financial crisis hit, AAA rated subprime bonds traded at substantially cheaper prices than non-subprime issues that were otherwise equivalent (including their ratings).   Thus, even before the crash investors had drawn the conclusion that equally rated subprime and non-subprime bonds did not have equivalent risk levels, although with the benefit of hindsight it is clear that most bondholders underestimated how bad things would get.  This is one area, at least, where investors and the rating agencies have found common ground.