Complacency and Challenges for Active Asset Managers – and a way forward

A recent Financial Times article featuring the juggernaut known as Vanguard Asset Management provided a useful reminder, if we needed one, of the declining business outlook for US active asset managers.   It’s a sad but familiar tale, particularly in the equity space.  Yet despite the negative trends which we touch on later, the sector doesn’t seem to be exhibiting signs of severe crisis.  Yes, equity valuations are down and the rate of consolidation is up, but there are few indication of similarity to the proverbial buggy whip business at the dawn of the automobile era.

In this article we review some key, mostly negative, trends for US active asset managers and why many players have been able to maintain their business models in the face of these pressures.  We then suggest a path forward for them, one that we’ll explore in greater length in an upcoming post.

The money flows out, the fee levels go down
It’s never good when your clients are “voting with their feet”, and are doing so against you.  This is been the case for active asset managers in the US, who have experienced fund outflows in excess of $2 trillion during the past decade.  By contrast, over the same period passive management strategies have seen inflows of close to $3 trillion (Figure 1). 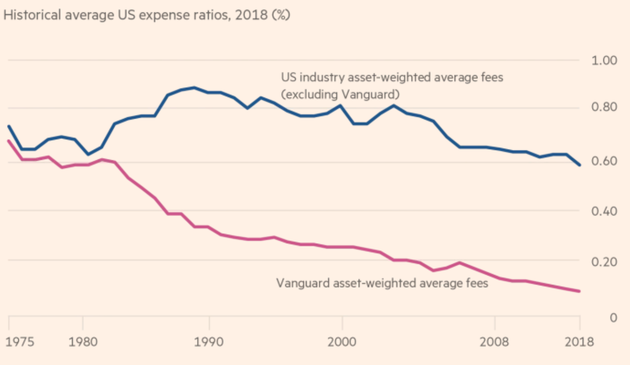 The decline in active management fees as expressed as a percent of assets under management, or AUM (Figure 2) is a much-cited headline development, and one that only compounds the problem.  The Figure shows an even sharper drop in passive fee levels.  But this is from a much lower base, so the decline in the dollar value is less.
​
Figure 2: AUM fee trends, 2013-2018 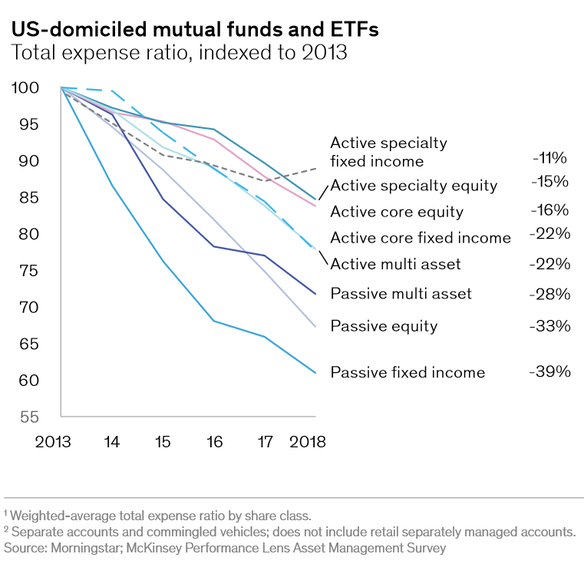 In most industries the loss of a significant portion of a core business and a double-digit drop in the price for your product would be classified as an existential crisis.  Not so – or at least not yet — for US active asset managers.  So what’s going on?

A rising tide floats most boats
The main reason that relative calm prevails is the buoyant stock and bond markets over the past decade, a period during which the S&P 500 Index posted a gain of 187% and the cumulative total return for investment grade bonds was 65%.  This means that rises in market values have more than offset fund outflows, leading to substantial gains in assets under management held by fund managers.  Which are, of course, the basis for their fees.  Indeed, in many cases the increase in value has been more than enough to counter the fall in AUM fees, expressed as a percentage of funds under management.
This dynamic is illustrated in Figure 3, which shows the breakdown of public assets held in US mutual funds and exchange traded funds and their totals between 2008 and 2018.  Even though the actively managed share of public assets fell from 82% to 64%, the nominal amount rose from $5.2 trillion to $11.5 trillion, more than offsetting the fall in fee levels (expressed as a percent of AUM) over the period.
​
Figure 3: US AUM split by style and vehicle, 2008 and 2018 (Source: ICI) 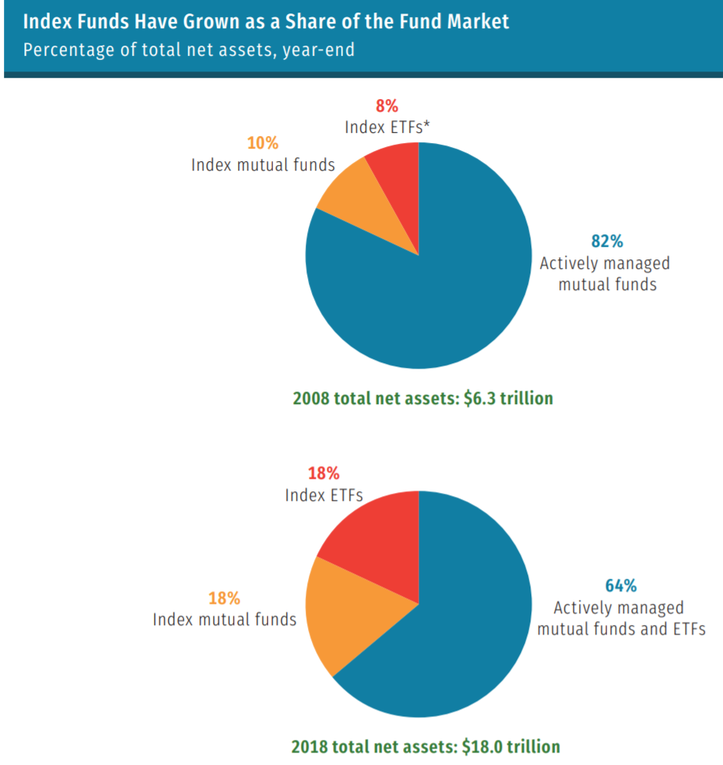 There’s no reason to change – yet
There are other reasons why the active management businesses remain attractive for fund managers.  One is the sheer size of the sector: active management fees make up around a quarter of revenue for US asset managers.  Secondly, while active management fees expressed as percent of AUM have declined, they remain a lot higher than for passive strategies – where fees are also down sharply.   Thirdly, the leading players have extensive infrastructures, relationships with distributors of their products, and brand equity in the form of reputations for client service and alpha generation (even if the latter has taken hits recently) that they are loath to abandon.

Finally, we should never underestimate the inertia inherent in any large organization, along with the logic that there’s no need to make radical changes to a model that’s still producing good results.  Lending support to the latter point, average asset manager revenue growth and margin levels compare quite favorably to those in other banking/finance sectors (Figure 4).
​
Figure 4: Asset management revenue growth and margins vs. other financial sectors 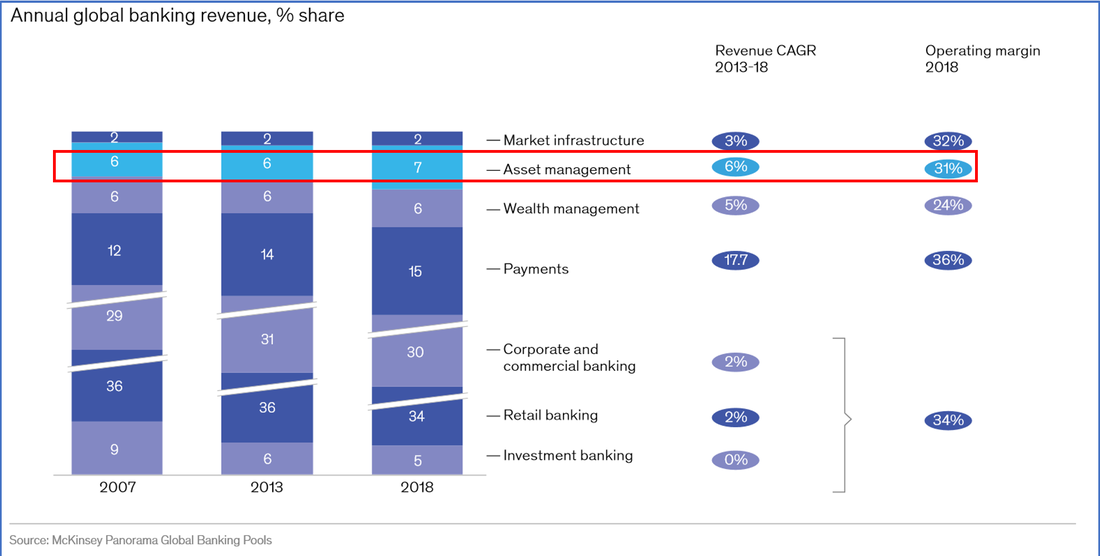 What goes up must “correct”, eventually
As always, the past is not prologue for the future.  In the case of asset managers, markets will fall, as they always do, at which point the deteriorating business fundamentals for active strategies will be laid bare.

To make matters worse, fund managers’ expenses has been climbing (Figure 5).  The Figure highlights a couple of trends that in particular bode ill for asset managers in the future.  The first is that the fastest growth is occurring in expenses related to areas other than “Investments”.  Thus, the “tooth-to-tail” ratio – to borrow a term from the military – is declining.   That is, the amount of resources going into the parts of the business that directly generate revenue (the “teeth”) is falling relative to the other areas that do not (the “tail”).

The second trend is that the estimated average costs in relation to AUM have fallen slightly since 2007 (from 26 bp to 24 bp), as the growth in nominal assets has outpaced the rise in expenses.  When markets sell-off and AUM declines, this expense ratio will rise, unless managements take some pretty drastic steps. 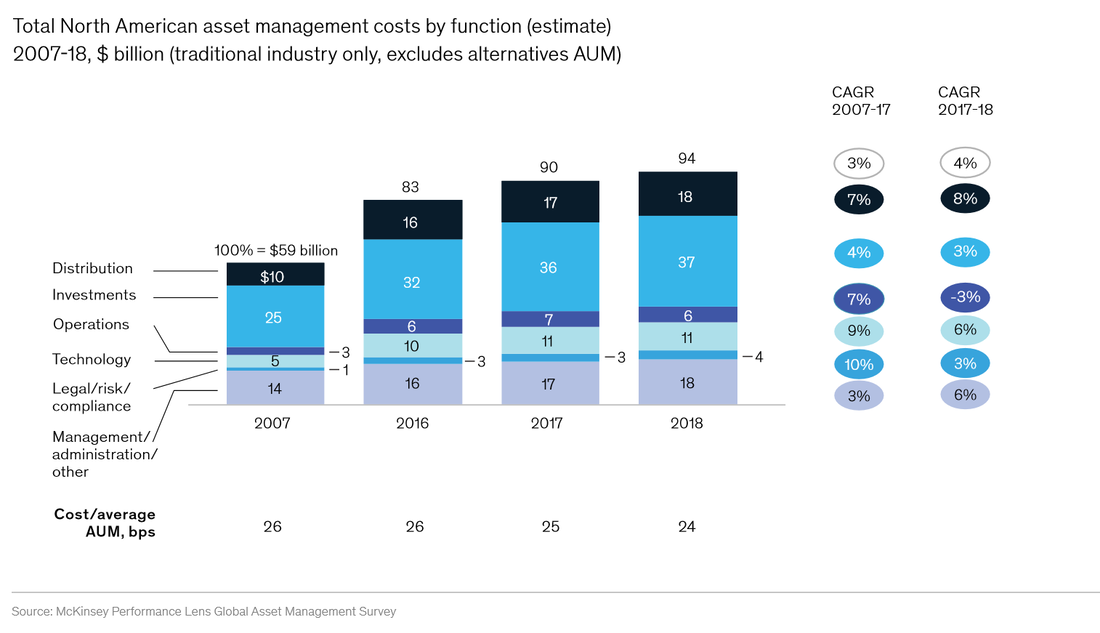 ​Alpha Lite: a proposed solution to the conundrum
Of course, the leaders of big asset managers are well aware of the foregoing trends.  One response has been to seek new ways to generate alpha, often in the form of spending on alternative data and artificial intelligence, in particular machine learning (these trends are one of the drivers of the increased spending for Technology in shown Figure 5).  But such strategies require heavy investments in data, systems, and headcount, and have uncertain payoffs.

We suggest an alternative approach, one that allows active asset managers to preserve their business models, and thus fees, while leveraging their human capital in the form of portfolio managers and analysts.  This is to integrate quantitative entity and security-level relative value and risk signals into their existing processes.  This “alpha lite” approach has been around for a while, but we believe it deserves an even closer look now.  We will explore it in detail in an upcoming post.